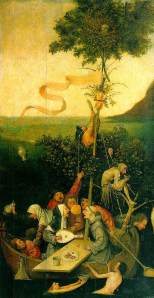 The allegorical concept of the ship of fools served in the middle ages as a counterpoint to the “Ark of Salvation” represented by the Catholic Church. The authorities in Rome used it as a teaching tool to expose the “folly” of independent thinking and the rise of Protestantism. In simple terms, the Catholic Church, with the Pope at the helm, was bound for the hereafter, and the Protestant churches were rudderless, leaderless, adrift and bound for who knows where?

In practical terms there were actual “ships of fools”. They were the renaissance version of the freak show. Communities could divest themselves of lunatics by handing them over to the ship of fools. When the ship docked you paid an entry fee to see the antics of the fools aboard.

The concept of the State as a ship is far older, going back to ancient Greece. Plato immortalised it in “The Republic” when he likened the good management of the state to the good captaincy of a ship. A well run state should be captained by a philosopher king, ideally one trained in the Platonic school.

It is very easy to string together the concepts of Ship of State and Ship of Fools to come up with the State of Fools that is the Irish Government. Recent revelations show how the Irish Government was played for a fool by the executives in Anglo Irish Bank. The tapes expose the bankers themselves to ridicule. They come across as little more than a clique of silly schoolboys playing games with a lot of money. Their behaviour would be puerile in a football locker room, it has no place in a national bank.

What is really sad is how the regulators and the government were asleep at the wheel. When they were called on deck to save the ship they didn’t know their location or their direction and were sailing without compass, sextant or chart. As long as the bankers were playing with bank money they exposed nobody but those foolish enough to trust them. When the Irish Government agreed to support the banks, they made the people of Ireland responsible for the bad behaviour of the bankers. Not just bad, but downright fraudulent behaviour.

If you asked me ten years ago for my opinion of those running our banks, our banking system and the government I would probably have believed them to be knowledgeable and capable. I would have thought that they held the best interests of the state at heart. I would have felt that they held their very well-paid positions through merit and deserved the money they earned.

Now I believe that the managers of our banks and our elected politicians are deeply flawed characters. They hold their own interests ahead of those of the state. They are not well qualified for what they do. They plan only in the very short term. They are grossly overpaid. They are a very, very expensive bunch of fools.

The Ship of State: by Quintus Horatius Flaccus (Horace)

O ship the fresh tide carries back to sea again.
Where are you going! Quickly, run for harbour.
Can’t you see how your sides
have been stripped bare of oars,

how your shattered masts and yards are groaning loudly
in the swift south-westerly, and bare of rigging,
your hull can scarce tolerate
the overpowering waters?

You haven’t a single sail that’s still intact now,
no gods, that people call to when they’re in trouble.
Though you’re built of Pontic pine,
a child of those famous forests,

though you can boast of your race, and an idle name:
the fearful sailor puts no faith in gaudy keels.
You must beware of being
merely a plaything of the winds.

You, who not long ago were troubling weariness
to me, and now are my passion and anxious care,
avoid the glistening seas
between the shining Cyclades.

2 thoughts on “Ship of Fools”