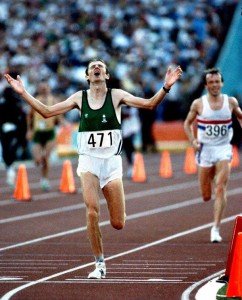 The battle of Marathon was fought between a greek army and the Persians on this day in 490 BC.

In the days leading up to the battle the Athenian and Plataean Hoplites had the Persians pinned in a holding action on the Plain of Marathon.  The lightly armed Persians did not want to go toe to toe with the Greek heavy infantry.  The outnumbered Greeks for their part had no wish to go on the offensive.  They were happy to remain in stalemate while they sent runners to seek more reinforcements.

One of their runners was Pheidippides.  His mission was to run  to Sparta, 140 miles away.  In heroic manner he completed the journey in two days.  The Spartans said they were in the middle of a “religious festival” and couldn’t come until it was over.

For some reason (perhaps concerned that reinforcements would arrive) the Persians decided to bring the Greeks to battle.  The Persian army favoured the use of ranged weapons, archery, slinging and javelins.  They prepared to engage the Greeks from a distance.  For their part the Greeks had little interest in being shot at as they marched into battle.  For the first time in history they decided to mount a charge on foot.  The Persians were taken by surprise.  Their lightly armed infantry was decimated.  The wings collapsed and the Greeks began to envelop the centre of the Persian line.  The Persian withdrawal turned into a race for the ships and quickly became a rout.

After the battle the Athenians were concerned for their city.  They had left Athens defenseless to bring as many troops as possible to battle in Marathon.  As the Persian fleet set sail for Athens the Hoplites made for home in haste.  They covered the 25 mile distance in rapid time.  When the Persian fleet saw the Athenian army arrive overland they turned away from the City.  Victory was complete for the Athenians.

Over time the stories of Pheidippides run and the forced march of the Athenian army became confused.  From the confusion was born the concept of the Marathon  race.  When the first modern Olympic games was staged in Athens in 1896 the idea of a Marathon race was proposed and accepted.  It has become one of the enduring pillars of the Olympic ideal, the ultimate distance race and a cauldron of legends.

Running ; by Raymond A. Foss

She was running this morning
early Sunday morning
while we drove by on the way to church
black top, black shorts,
once white running shoes
toned features,
purposeful face,
black bands on her biceps
hair bouncing in the breeze
It seemed she was arguing
with herself, the way her head
jerked from side to side,
her face grimaced
with the footfalls down the hill,
off the bridge, like she was debating
and losing the point
propelled on, downward
by gravity, by the flow of the sidewalk,
as she was running this morning
Whatever joy led her to the work,
catching the beauty of the morning,
freedom from other cares,
they were lost, in the puffing,
the contorting, the hurtling
down the hill by the river
Running was the only thing,
the only thing left.