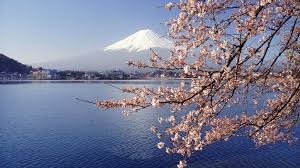 The Japanese kanji characters in the title are the syllables Ni – pon or Ni – hon.

They refer to a place where the sun emerges, translated now to “Land of the Rising Sun”.

The naming of Nippon makes sense when contextualised in a world where China was the centre of the universe and all things not China are described relative to the centre.  Specifically the name appears in court papers of the Chinese Sui dynasty of the late 6th early 7th Century AD.  Japan, to the East of China, lies in the direction from which the sun rises over China.

While Mandarin Chinese retained the Japanese pronounciation, it became corrupted as you travelled further South.  In the Shanghai Wu becoming something like Chi-pon.  Further south in Cantonese and Malay it evolved into Ja-pan.

The European traveller Marco Polo returned to Italy with tales of an Island nation called Cipangu and Italian pronounciation would render this as Chi-pan-go.  It is a corruption of the term Nippon Koku; the Japanese term for “State of Japan”.

When the Portuguese ventured East they arrived in the areas around their Pearl River colony of Macau in Southern China where the locals used the “Cha-pan” pronounciation of the Kanji characters.

does the reflection
at the bottom of my thin rice gruel
feel it has been fed?