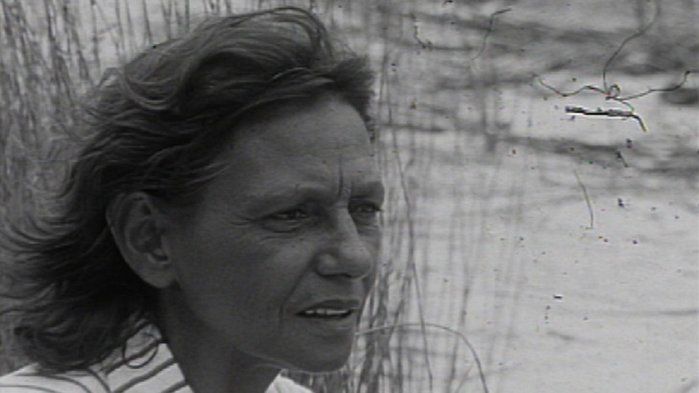 Kathleen Jean Mary Ruska was born on November 3rd in 1920.  During the 1960’s Kath Walker emerged on the Australian political scene.

As a representative for the Aboriginals she met Prime Minister Robert Menzies with her delegation.  He hospitably offered his visitors a drink.  Walker pointed out to him that he was breaking the law.  It was illegal to offer Aboriginals alcohol in 1960’s Queensland.

We are Going (1964) was the first book to be published by an aboriginal woman.

In 1983 she adopted her traditional name Oodgeroo Noonuccal.  Oodgeroo is now an electoral district in Queensland

Municipal Gum; by Oodgeroo Noonuccal
Gumtree in the city street,
hard bitumen around your feet,
rather you should be
in the cool world of leafy forest halls
and wild bird calls.
Here you seems to me
like that poor cart-horse
castrated, broken, a thing wronged,
strapped and buckled, its hell prolonged,
whose hung head and listless mien express
its hopelessness.
Municipal gum, it is dolorous
to see you thus
set in your black grass of bitumen–
O fellow citizen,
what have they done to us?

It’s tough as a poet to share a birthday with someone as famous as Edgar Allan Poe (Jan 19th 1809).  Such is the fate of Reginald Charles (Rex) Ingamells (b. 1913).  The leading light of the Australian poetry group known as the Jindyworobak Movement.  They sought to free Australian art from subservience to old world influences and to celebrate the vernacular voices and indigenous inflences that give Australian English it’s unique character.  The movement flourished in the 1930’s and 40’s.  These days it suffers criticism because it was a white movement that celebrated aboriginal and bush life influences.

These days the Australian first nations peoples reject the hijacking of their culture by white immigrants who had a poor understanding of the native zeitgeist.  Effectively the Jindyworobaks are now seen to have been doing to Aboriginal Art the very thing they were fighting against where European writers were seeking to hijack their first hand experience.

I like the poetry of the movement and I think they served an important role in bringing the Australian voice to life.

News of the Sun: by Rex Ingamells

The noon is on the cattle-track;
the air is void of sound,
except where crows, poised burning-black,
cry to the dusty ground.

Through mulga and mirage go none
but brazen Boolee now,
scorning the mercy of the sun
beneath the niggard bough.

But suddenly the mulga stirs;
the hot leaves flash like stars;
and, threading song on wing-beat whirrs,
burst flights of gay galahs.