Swastika laundry was founded in Dublin in 1912 by John W. Brittain from Manorhamilton in County Leitrim.  A pioneer of the laundry business he was postively futuristic in his selection of delivery fleet.  The swastika laundry fleet were all electric vehicles a century before electric was cool.

He also designed a brilliant graphic as a logo, using an ancient Sanskrit symbol for good luck.

In 1909 Alois Hitler Junior, the older half brother of Adolf Hitler, came to Dublin to work.  While attending the Horse Show in the RDS he pretended to a gullible Irish girl, Bridget Dowling, that he as a wealthy hotelier.  In fact he was working as a waiter in a Dublin Hotel.

In 1910 they eloped to Liverpool and Bridget gave birth to Patrick William Hitler.  The marriage did not last long.  It is well known that the Hitlers came from an abusive family and the pattern continued with Alois.  The marriage was effectively over by 1914 when Alois returned to Germany.  Some say he insisted on returning as the countries moved to a war footing but that she refused to move further from here Dublin origins.

In any case Alois was well positioned, only a mailboat away from Dublin, to observe the flash fleet of swastika laundry vans that hit the streets of the Irish capital.

There are some who suggest that the graphic was communicated, either overtly or subliminally to Alois younger brother, the failed artist and budding politician Adolf.  It was Adolf who claims ownership of the Nazi swastika design with its classic field of red, circle of white and black swastika.  The Nazi version is of course nothing like the Irish laundry van version.  It is tilted on its axis.  Totally different.

As for the young half Irish Paddy Hitler, he visited Germany in 1927 to meet the father who pretended to his family to have died in the War so he could remarry.  Alois was charged with bigamy as a result.  Paddy was introduced to uncle Hitler during his visit.

Patrick and his Mother departed from Liverpool to the USA in 1939 just in time to avoid a second world war.  He gave some lectures about his “madman uncle” until the USA joined the war, when he enlisted in the medical corps. 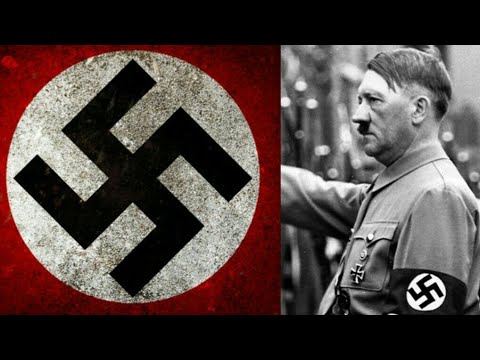 Swastika laundry continued to use the sanskrit symbol, and made a point of publishing their foundation date, 1912, predating the Nazi’s.  They share this honor with no less than Carlsberg brewery, where the gate is supported by two great elephants, bearing the swastika symbol.