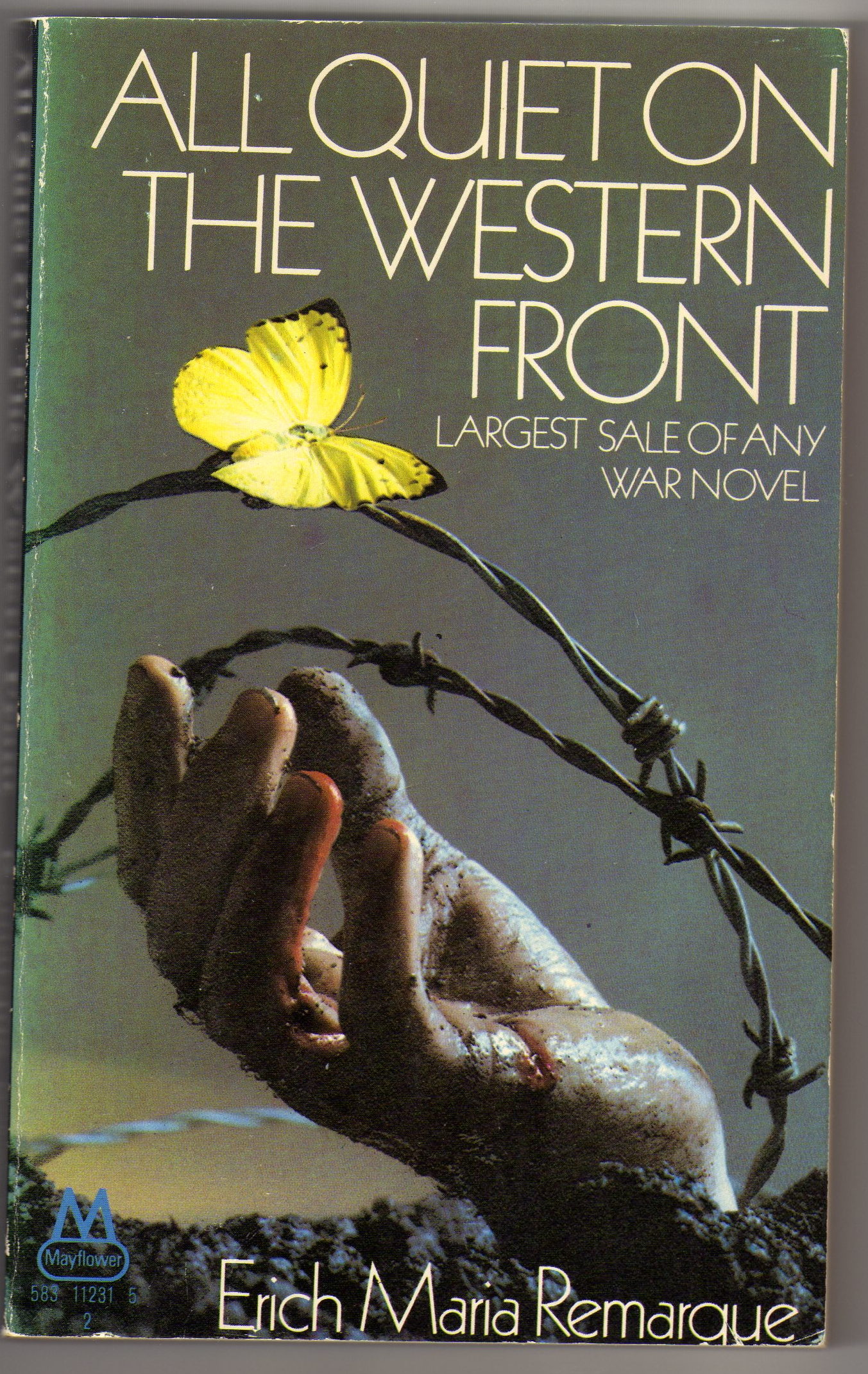 This is the cover of the novel that we had at home, the one I read.  The hand, the barbed wire and the butterfly make an image that has stuck in my memory.  Erich Maria Remarque, born Erich Paul Remark, on this day in 1898.

Novels about war were not new.  Stephen Crane wrote the Red Badge of Courage in 1893 and it tells of the US Civil War from the standpoint of an ordinary soldier.  It reads like a personal account, but Crane was a novelist, not a soldier.  He was born after the war and based his book on interviews with veterans of the war.

Remarque fought in WW1, and was wounded.  He became a teacher after the war and then wrote the novel in 1928.  In the novel he is particularly hard on teachers who instill mindless nationalism in their students.  Above all it is an anti-war novel.

The Nazis hated it.  Remarque was declared “unpatriotic” and his books were removed from German libraries and added to the bonfires.  He moved to live in Switzerland.  In Germany the facts of his military service were denied by the Third Reich and his citizenship was revoked.  He moved with his wife to the USA before the outbreak of the war and eventually became a US citizen in 1947.

His sister in Germany, Elfriede Scholz, was tried on a charge of undermining morale and was beheaded.  The court stated “Your brother is unfortunately beyond our reach — you, however, will not escape us”.

“Kropp on the other hand is a thinker. He proposes that a declaration of war should be a kind of popular festival with entrance-tickets and bands, like a bull fight. Then in the arena the ministers and generals of the two countries, dressed in bathing-drawers and armed with clubs, can have it out among themselves. Whoever survives, his country wins. That would be much simpler and more just than this arrangement, where the wrong people do the fighting“. (3.42)

Born this day in 1884 Seibo Kitamura was the sculptor of the Nagasaki peace statue which is located in Nagasaki Peace Park, ground zero for the atomic bomb.

His right hand points to the sky from where the bomb fell.  His left is extended in a gesture of peace.  His right leg is in a meditative pose, reflecting the eyes, close in prayer for the dead. His left leg prepares to stand, to help the people.  A plaque on the statue reads as follows:

After experiencing that nightmarish war,
that blood-curdling carnage,
that unendurable horror,
Who could walk away without praying for peace?
This statue was created as a signpost in the
struggle for global harmony.
Standing ten meters tall,
it conveys the profundity of knowledge and
the beauty of health and virility.
The right hand points to the atomic bomb,
the left hand points to peace,
and the face prays deeply for the victims of war.
Transcending the barriers of race
and evoking the qualities of Buddha and God,
it is a symbol of the greatest determination
ever known in the history of Nagasaki
and the highest hope of all mankind.

— Seibo Kitamura (Spring 1995)
Nagasaki should never have been bombed.
When the Japanese commanders saw the devastation at Hiroshima on August 6th and confirmed that it was a nuclear weapon, they should have stopped the war.
Instead Admiral Soemu Toyoda, Chief of the Naval General Staff, estimated that no more than one or two additional bombs could be readied, so they decided to endure the remaining attacks, acknowledging “there would be more destruction but the war would go on”.  American code breakers read these signals and the order to drop a bomb on Nagasaki was given.
On August 8th the Soviet Union announced an end to their non-aggression pact with Japan and began invasion of Manchuria on August 9th.
Even after Nagasaki was bombed on August 9th it took 6 further days before the Japanese agreed a surrender.
I believe if wars were fought as envisaged by Erich Maria Remarque in All Quiet on the Western Front we would have far fewer wars:
Kropp on the other hand is a thinker. He proposes that a declaration of war should be a kind of popular festival with entrance-tickets and bands, like a bull fight. Then in the arena the ministers and generals of the two countries, dressed in bathing-drawers and armed with clubs, can have it out among themselves. Whoever survives, his country wins. That would be much simpler and more just than this arrangement, where the wrong people do the fighting. (3.42)
.