On the night of the 20th and 21st of December, 1963 the newly independent Republic of Cyprus erupted into a frenzy of violence between the Orthodox Greek Cypriots, Armenian Christian Cypriots and Turkish Muslim Cypriots.  The events became known as Bloody Christmas (Turkish; Kanli Noel).

The violence was sparked by increasing tensions from Greek Cypriot demands for Enosis; union with Greece.  The gradual build-up of tensions erupted when Greek Cypriot police tried to search the persons of Turkish Cypriot women in a taxi.

By the end of the violence Turkish participation in the Cypriot parliament ended.  Deaths included 364 Turkish and 174 Greek Cypriots.  Isolated properties became too dangerous for their inhabitants and the rural populations became displaced into enclaves.

The ultimate outcome of the divisions between the communities resulted a decade later in the Turkish invasion of 1974, dividing the Island north and south to the present day.  The “green line” keeps the two parts of the island divided and in the middle of the green line, and in the middle of the capital city the airport of Nicosia is a permanent reminder of the invasion.  The aircraft grounded on that day by the Turkish invasion remain rotting on the tarmac.  The Departures and Arrivals building crumbles away with disuse.

EU Membership is hoped to encourage the Turkish North to reunify the island but the most recent talks stalled over rights of return and property ownership.  Over the years access through the green line has improved and more crossing points have opened.  But it may take another generation before a stettlement can be agreed. 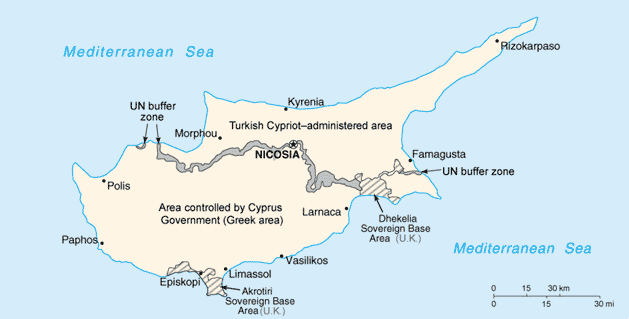