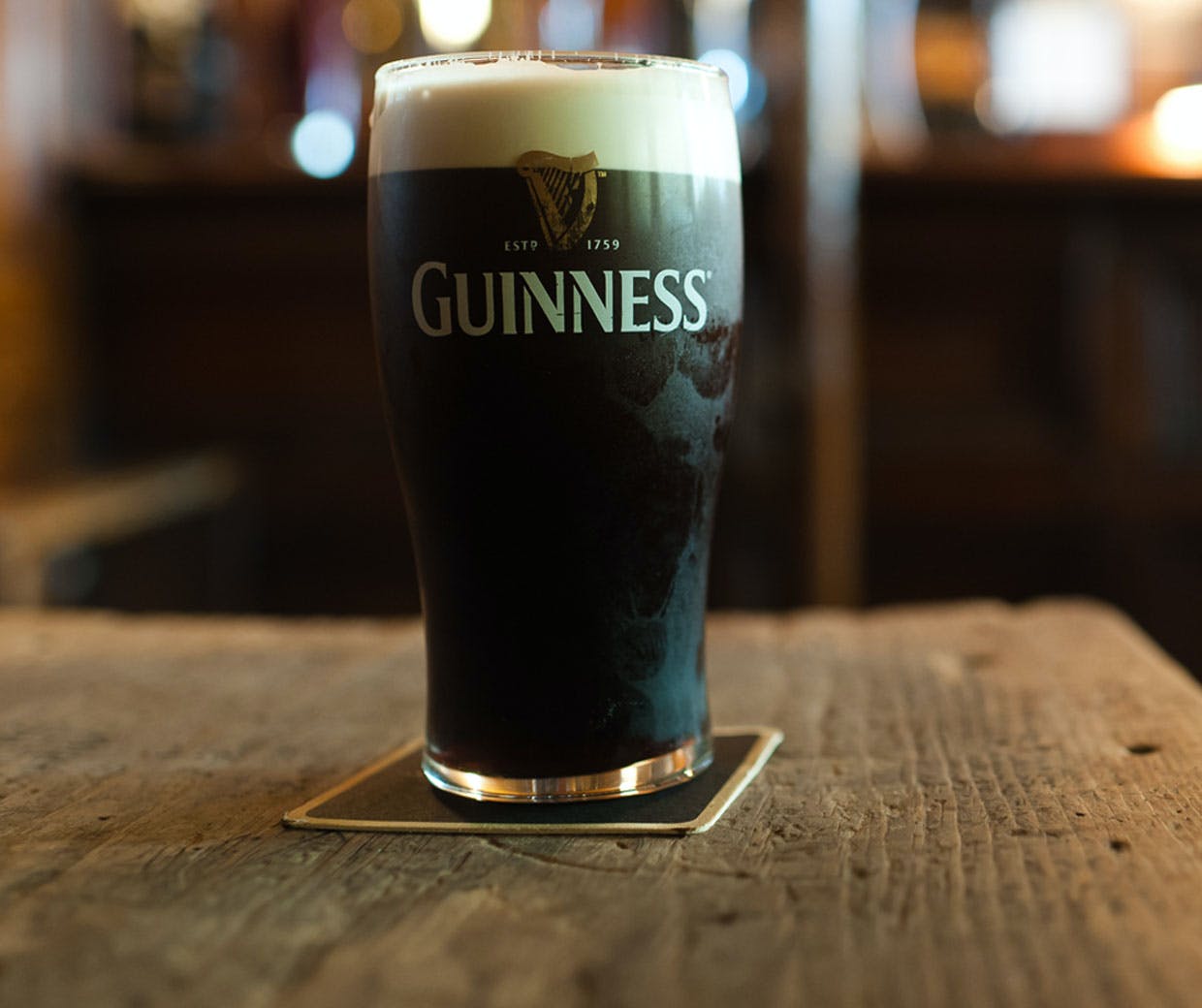 It tastes of the warmth of a turf fire on a cold winters night.

It tastes like a draught from a deep cold well on a hot summers day.

It tastes like a fair wind in the face in a good running sea.

It tastes like a strong winded stallion leaping a hedge.

It tastes like a fine salmon taking the fly in a stream.

It tastes of the air you breathe when you reach a mountain top.

It tastes like the smell of a peacefully sleeping child.

It tastes of a job well done, a match well won,

and that special someone.

St. Iago Matamoros, before he got into brewing stout.

No Verona, nor Reading this Gaol.
Not of my body, but of my soul
this bleak house a prison makes,
and echoes with my futile pleas.

How steep the stairs within this house are
for unwanted feet as mine to tread,
and oh how silent and bitter is the bread
which is broken on this marital table, better far
that I remained on flat greens,
or bare my head to St. James’s gate
than to live thus, ignored by all but those
that seek the freedom of my soul to mar.

‘Curse love and leave: what better hope than this?
She has forgotten me in all the focus
of her self-pity, and faded looks’–
Nay peace: behind my prison’s blinded bars
I do possess what none can take away,
My love, and all the memories of how we were.

Rowing the beer to the island.

Born this day 1871 John Millington Synge wrote the poem below which describes how the keg of porter had to be rowed to the island of Beg-Innish though the Atlantic waters where the gannets fish.

In 1977 Guinness made the iconic ad “Tá siad ag teacht” (They are coming) describing the same journey.  Still evocative after all these years, you can find it on Youtube.

The rowing boat they use in the still above is a traditional Irish Currach.  A high riding fragile shell made of ash frames covered in tarred canvas.  It is one of the oldest types of craft in continuous use.  Originally made with tanned ox-hide, and similar in construction to a coracle.  The Currach is a surprisingly good craft on the open ocean.  It was the workhorse of the fishermen of the Irish west coast for hundreds of years.  The design reflects the lack of large timber available, due to the scouring effect of Atlantic storms.

Light as a large canoe, the fishermen lift it over their heads and carry it up the beach to dry out after a day of fishing.  The image of fishermen with their currach brings to mind a scarab beetle and the circularity of life and death.  Many legs beneath a shiny black carapace.

We’ll have no priest or peeler in
to dance in Beg-Innish;
but we’ll have drink from M’riarty Jim
rowed round while gannets fish,
a keg with porter to the brim,
that every lad may have his whim,
till we up sails with M’riarty Jim
and sail from Ben-Innish.

Born in Belfast in 1810 Ferguson was a barrister and public servant, but also a poet and Irish antiquarian.  He studied Irish history and mythology fifty years before the Irish Literary revival led by Lady Gregory and William Butler Yeats.

He began writing poetry to pay for his education as a barrister, because his father flittered away the family money.

Ferguson married Mary Guinness of the Guinness Brewing family, and daughter of Robert Rundell Guinness, founder of Guinness Mahon bank.  He lived, and died, in Howth, a pretty fishing village north of Dublin.   But he was buried in Donegore, a tiny village in County Antrim.  I feel there must be an interesting story behind that choice of final resting place.

Many of his poems were written in both Irish and English.  Even in English you can hear the beautiful lyricism of the Gaelic come through.  His work has a sing song quality that could be adapted to music and indeed many of his poems read like ballad lyrics.

This poem Cean Dubh Deelish is Irish Gaelic Ceann dubh deiliúsach which translates as saucy dark head or impudent black hair or something endearing along those lines.

O many and many a young girl for me is pining,
letting her locks of gold to the cold wind free,
for me, the foremost of our gay young fellows;
But I’d leave a hundred, pure love, for thee!

In archaeological terms Ireland is a child.  There were no humans on the island in the paleolithic.  We have no history of neanderthals, homo habilis, homo erectus or earlier australopithecenes.  In the grand history of man we arrived on the island as fully formed modern day humans.  The earliest people arrived between 10,000 and 8,000 years ago.  They probably walked here over land-bridges left by the retreating ice sheets of the last great ice age.

At  the same time the history of Ireland is ancient.  We have great monuments and burial mounds that pre-date Stonehenge and the Pyramids.  We occupy a landscape that is steeped in history and sense of place.  We are well rooted in our environment and secure in our place in the world.

Tourists come to Ireland and take a quick spin around what is a small island.  They tick off the boxes on their holiday to-do list;  The Wild Atlantic Way, the Cliffs of Moher, Giants Causeway, Dublin Castle, Irelands Ancient East, Killarney, Queen Maeves Grave, Yeats Tombstone, the Guinness Brewery, Rock of Cashel etc.  In the new world that is how you have vacations, you go from tourist attraction to tourist attraction.

The odd time you meed a real world traveler who understands how to see Ireland properly.  Ireland is to be found in the fields and ditches, down back alleys and up mountain sides.  It is a country of many small attractions, each one having its own story.  The trick is to find the local historian who can walk a site with you and bring it to life.

Then you go to the pub and discuss the important things; sport, politics, religion, the shape of a girls ankle and the fall of a sparrow.  On your way home, if you are very sensitive to your surroundings, you may even be lucky enough to turn out a shadow that could be a fox, or a fairy, a banshee or the shade of a long dead king.

At Currabwee; by Francis Ledwidge

Every night at Currabwee
Little men with leather hats
Mend the boots of Faery
From the tough wings of the bats.
So my mother told to me,
And she is wise you will agree. .

Louder than a cricket’s wing
All night long their hammer’s glee
Times the merry songs they sing
Of Ireland glorious and free.
So I heard Joseph Plunkett say,
You know he heard them but last May.

And when the night is very cold
They warm their hands against the light
Of stars that make the waters gold
Where they are labouring all the night.
So Pearse said, and he knew the truth,
Among the stars he spent his youth.

And I, myself, have often heard
Their singing as the stars went by,
For am I not of those who reared
The banner of old Ireland high,
From Dublin town to Turkey’s shores,
And where the Vardar loudly roars?

The high priest raises the chalice.

He holds it reverentially beneath the spout.

With considered deliberation he fills it to the brim.

Thy will be done.

Turning, turning, to raise the angle until the vessel is upright.

Give us this day!

Before him the congregation stands mesmerised by the ceremony.

as he lays it on the altar.

As it was in the beginning.

I left work today in the sunshine of a Dublin Spring afternoon.  Down along the banks of the river the washerwomen were rinsing their clothes in the pure, clean flow of Annalivia Plurabella.  Their damp shifts clung to their thighs and breasts and their hair drifted seductively on the balmy breeze.

Up above, on the bridge, the local lads took in the scenery, wolf-whistling and cat-calling at the women below.  The washerwomen gave as good as they got and the banter flew backwards and forwards like a gay tarantella.

From the North Quays you could hear the skreel of the Uileann pipes, the fiddle, the flute and the beat of the Bodhrán as a band warmed up for the evening session.  Workers poured into the streets, heading for an early pint to celebrate another day down.

In counterpoint the Angelus bells tolled from the heights of Christchurch to remind us that it is still Lent.

All the colour, the noise, the sweet barley malt and earthy hop scents from the Guinness brewery combining for a heady spring afternoon in Ireland’s capital.  Where else in the world would you want to be?  I think Lorca was in Dublin on such a day when he wrote Seranata.