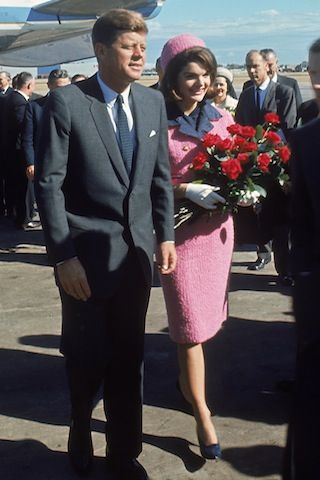 Born this day in 1929 Jackie Bouvier married J.F.K. to become the second youngest First Lady in history.  The young couple and staff of the Kennedy Whitehouse gained the nickname of “Camelot” after the hit musical of the day.  Bouvier Kennedy was a style icon of her day.  She renovated the Whitehouse and made it more public to the American people.  She is best rememered in her classic style of tailored suits, matching pillbox hat and white goves.

The outfit in the photo is the pink Chanel suit she was wearing when John was assassinated in Dallas.

Don’t let it be forgot, that once there was a spot, for one brief, shining moment that was known as Camelot. There’ll be great presidents again … but there will never be another Camelot……………  Jackie quoted in Life magazine.