Ulster Carabiner of the 9 years war

What is considered to be at the “cutting edge” of military development can be very surprising.  In the 1590’s the dominant force in Europe was Spain.  They ruled the continent with their Tercios, the mixed phalanxes of Musketeers, Pikemen and Swordsmen. 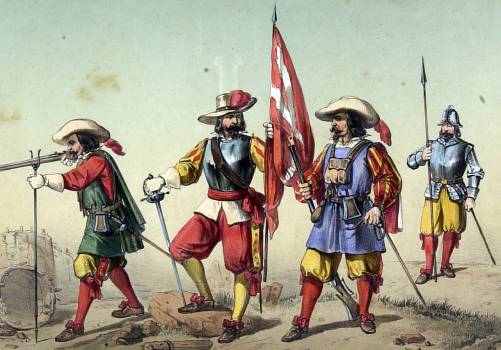 They were highly disciplined, highly drilled and worked as a cohesive unit.  Cavalry charges could not break the infantry lines.  The Musketeers were protected by the pikes and swords.  The great muskets and arquebuses were so heavy they acted like small cannon.  Firing them required a support stand to steady the barrell.

The English who invaded Ireland under Elizabeth I were armed and armoured like the Tercios.  They had good shoes and warm socks.  The pikemen wore half armour for protection against cavalry sabres.

In Ireland they met the pride of Ulster, the carabiners of Hugh O’Neill and Hugh O’Donnell.  This yellow garbed barefoot lad with a spanish pattern helmet does not look like much but looks can decieve.

His weapon is a carbine, lighter and shorter than the muskets and arquebuses of the English, and the very cutting edge of firearms technology in its day.  O’Neill equipped his men with a lighter weapon for very good reasons.

Ireland is not a flat land of grainfields and open plains.  The open country of the continental mainland where the Tercios fought against the French and the Dutch accommodated large formations.  Ireland is a country of hills and bogs cut all over with small streams and rivers.  Uneven and wet land.

Anyone who hikes regularly in Ireland knows how the acid water from the peat bogs will eat the boots off your feet.  Good waterproofing is vital for modern boot materials.  In the Elizabethan era the fine footwear of the soldiers melted off their feet within days.  Even when the shoes were in good shape they gave no good purchase in wet boggy hills.

So the yellow cloaked Irish carabiner in his bare feet actually knew what he was about.  Stay light, stay agile, stay warm.  That great shapeless yellow thing he is wearing was the butt of many jokes by English soldiers over the years.  But it is made of raw wool dyed saffron, the royal colour of Ulster.  The wool is warm and waterproof.  Even when it is soaking wet it keeps you warm.  Vital in Ireland.  It acts as cape, cloak, greatcoat, groundsheet and sleeping bag.

O’Neill spent his money wisely, on good shot, good powder, good firearms.  He drilled his men to use the natural advantages of the countryside, fighting a guerilla war against the English.  He fought them to a standstill for nine years.

The eventual demise of the Irish comes down to the incompetence of the Spanish.  The Armada had been a great failure, and English protestants were assisting the Dutch rebellion against their Catholic Spanish Majesties.  The Spanish Kings felt that Ireland represented a possible second front to keep the English bottled up.  The great soldiers of Spain sent to assist the Irish did not land in Ulster.  Battered by storms many never made it to Ireland and those that did landed in Kinsale and Baltimore, at the very other end of the Island from the strongholds of Ulster.

In that defeat at the Battle of Kinsale lies the root of the current situation where Northern Ireland remains part of the UK.

The yellow carabiner in the photo forms part of an exhibit in the Irish National Museum at Collins Barracks, Dublin, which traces Irish involvement in Military Engagements all over the world through history.

I already have one of these buckets at home.  They are tough black plastic, very durable, very strong.  The reason this one is on my bucket list is because of the one I lost back in about 1988.  Summer of ’87 I learned how to sail and took to it like a duck to water.  The following year I jumped on any boat that would have me.

I think this bucket was on Tom Colliers boat, a steel 50 foot sloop.  We sailed her from Kinsale to Baltimore and arrived for the Baltimore Regatta.  So that gives me an exact weekend, the August Bank Holiday.

There was a rope tied to the bucket handle, finished off with a beautiful monkeys paw.  Not the hand of a tree dwelling simian.  The rope one (see below).

So I, in my naivety, thought I could dip for a bucket of water from a cruising yacht simply by slinging over the bucket and holding onto the rope.  The bucket hit the sea, the bucket filled.  Bye bye bucket.

When we got to Baltimore I toddled up to the chandlers and purchased a replacement for the boat.  The damage to my wallet was minor in comparison to the damage done to my ego.  Lesson learned.  When you throw things into the sea off a yacht you must tie them on if you ever want them back.

So this bucket is on my bucket list, not as something i want to do, but as a memory of a good lesson learned.