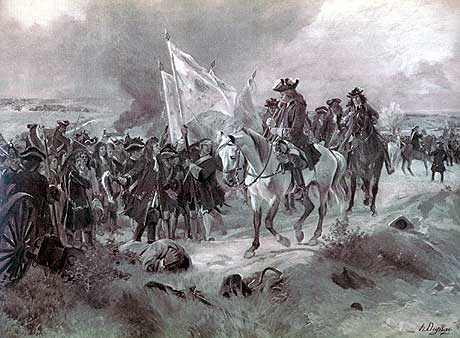 One swallow doth not a summer make.  Although the Duke of Marlborough won a great victory at Blenheim in 1704 in the war of the Spanish Succession, he was unable to capitalize on it in 1705.  Given a year to recover his position Louis XIV felt he could at the very least bargain a better peace if he made a military demonstration.

With this in mind in the Spring of 1706 he launched campaigns in Italy and Germany with some success.  On the back of the early gains he launched Marshal Villeroi from Leuven into the Netherlands.  At Ramillies he met John Churchill, hungering for an opportunity to deal decisively with the French.

The French, Spanish & Bavarian alliance collided with Churchill’s English, Scottish, Dutch and Danish army on open flat farmland near the village of Ramillies.  The ground was a flat canvas, the perfect medium on which a skilled general could dictate a battle.  In four hours the Duke of Marlborough demonstrated why he was the greatest general in the world in his day.  23rd May is the anniversary of the battle.

The beauty of such a decisive win early in the campaign season is what happened next.  Malines, Lierre, Ghent, Alost, Damme, Oudenaarde, Bruges, and on 6 June Antwerp, all subsequently fell to Marlborough’s victorious army.  The Spanish Netherlands was Spanish no more.

I wrote this post last night, before the news leaked through of the explosion at the Manchester arena.  This morning we hear that 22 people lost their lives and over 50 have been injured in a suicide bomb blast.  Some of the casualties were children, which is no surprise in the audience of the Ariana Grande Dangerous Woman show.  A lone suicide bomber was responsible.

I hate to jump to conclusions without the full facts, but it has all the hallmarks of Islamic extremism.  John Churchill, the Duke of Marlborough, had the benefit of a defined enemy with stated aims.  His opponents decked their troops in uniforms and lined them up on fields of battle.  Islamic extremists have no country.  Their aim appears to be the destruction of all that is not Islam.  They are happy to die to achieve this aim and have a constant supply of suicide bombers.  They are happy to slaughter innocent children to pursue their goals.  They are happy to recruit impressionable teenagers, and indoctrinate them in madrasas converting them into weapons of flesh and bone.  How do you deal with such people?

I think Ariana Grande herself said all that can be said:

in 1643 on this day the French defeated the Spanish at the battle of Rocroi.  This was a major shift in the continental power balance.  For over 150 years, since the 1492 “liberation” of Granada in fact, the Spanish were the dominant power in Europe.  Their troops were considered to be invincible.  Everyone lived in fear of meeting the Spanish “Tercio”.

It was the Spaniards who led efforts to defeat the Turks in the Western Mediterranean and in battles such as the siege of Malta and Lepanto.

The power of the Spanish military was supported by a seemingly endless supply of wealth from their American colonies.

At Rocroi the army of the young Louis XIV, the Sun King, was led by a 21 year old general, Louis duc d’Enghien.  In truth the french did not defeat the Spanish Tercios.  They won the battle.  In the process they drove off the fighting squares of German and Walloon troops who fought for the Spanish Empire.  The tercios stood their ground despite repeated cavalry attacks and under savage bombardment from the French artillery.

In the end the Spaniards were offered full battlefield honors by the French in return for their withdrawal.  They departed from the battlefield bearing their arms and with their banners and flags displayed.

Nevertheless, this was a huge blow to the morale of Spain and a boost to the confidence of other continental armies.  The battle demonstrated that the Spanish were not invincible.  From this point on the fortunes of war on the continent were to be decided by France, Austria, Prussia, Sweden, Poland and Russia.

At Rocroi the French created their own legend, their own fame.

Below is a Camino poem which  says that we do not follow paths, we create them.  The link here is that Rocroi lies on the Camino de Santiago route if you start from Flanders, Holland, Denmark or Northern Germany.

Pilgrim, these are your footsteps

the way is nothing more;

Pilgrim, there is no path,

but that created by your walking.

By walking the path becomes,

you see what can never

Pilgrim, there is no path

only wakes in the sea.