The White Terror was the murder, killing & assassination of left wing forces during and after the Spanish Civil War by the Nationalists of the right under their Caudillo General Francisco Franco Bahamonde.  It is estimated that between 100,000 and 200,000 republican supporters were killed by assassination and in concentration camps during the Civil War and in the decade after the war.

A “Red Terror” of assassinations of Nationalist supporters was instigated on the Republican side.  The reds managed about 50,000 which is below half of the most conservative White Terror number.  In addition the “Red Terror” involved insider assassinations as the Communists eliminated competiton from Anarchists, Democrats and Union Leaders who did not fancy the creation of a Stalinist Spain.

Commonly remembered simply as Franco, the Dictator of Spain was born on this day, Dec 4th, 1892.  A career military man he came from a Naval family in El Ferrol but elected to join the army.  Serving in the Rif wars in Morocco he rose rapidly in the ranks and at age 33 was the youngest General in Europe.

He led the Spanish troops who brutally suppressed the Anarchist mine workers strike in Asturias, an event which polarised left and right and may have led to the civil war.

When the Civil War commenced with a military coup by a group of generals Franco was the junior of the junta.  He famously negotiated with Hitler to have the Luftwaffe airlift his Army of Africa to the Spanish Mainland.  All his rivals met with “unfortunate accidents” leaving Franco as Caudillo – the Spanish version of Il Duce or Der Führer.  From October 1936 to November 1975 he was dictator of a repressive conservative Catholic Spain.  He was buried on his death with full honors in the mausoleum at the Valley of the Fallen (Valle de los Caídos) the only person interred there who did not die in the civil war.

After a long and drawn out legal process to prevent the veneration of his dictatorship his remains were removed from the mausoleum in October of this year.

June 5th 1898 to 1936 when he was executed by the Nationalists in the Spanish Civil War because his pen was worth a regiment.  Happy Birthday Federico Garcia Lorca, feliz cumpleaños. 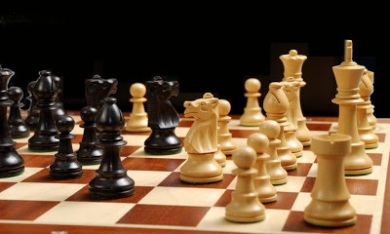 As an intermediate player you learn some of the strategic openings that are used to develop the game quickly and get as many pieces as possible into offensive positions.  A well-developed opening is often enough to defeat the beginner.  It is at this stage that you begin to realise that chess is not about controlling the movement of pieces.  Chess is about controlling the spaces on the board.

By controlling the space on the board, we reduce the potential for our opponent to catch us off guard.  This principle is common to all strategic planning, be it in a business or a military context.  We use formal planning frames or checklists to ensure that we have examined all potential threats and influences.  We can then eliminate them from our planning, or build the plan around them.

The expert player begins the game of chess with a vision of success.  They can see the game through to the end, before it even begins.  Their opponent may play very well and frustrate the shape of the win, but the expert will revise as the game goes on, and will generally win as a result.

In business planning the same dynamic is true.  Some businesses follow the formal planning frames and develop a workable business plan, but not a winning business plan.  Excellent businesses start out with a vision of success and focus their planning efforts on achieving that vision.

An example of this can be drawn from the differences in approach followed by the Nationalists and the Republicans during the Spanish Civil War.  These lessons were internalised by the Germans and used to polish their Blitzkrieg tactics.  The Russian tanks supplied to the Republican side were superior to the German and Italian tanks, but they were squandered due to lack of vision in battle planning.

Motorised armored columns can strike any defensive line and break through, if they do so in concentration.  The column then drives hard into enemy territory, cutting communications and causing confusion.  The attacking side know where they are going and what they are doing, because they are the ones making the decisions.  Once the motorised column has sown disruption in the lines the main infantry force can advance.  Defenders find themselves isolated as reinforcements are unable to move up due to the communications problems.  At the defending HQ the officers are assailed by a barrage of conflicting reports and struggle to piece together a picture of the battle.  Pockets of resistance hold out as defenders hold onto strategic towns or hills.  The advance moves past them, and a holding force besieges them to limit offensive sorties in the rear, and they are neutralised.  Everything happens fast.  Ultimately the only sane response for the defenders is to retreat to a defined holding point and regroup, losing ground and the troops in surrounded pockets.  This is classic Blitzkrieg.

The Russian generals in civil war Spain did not follow this pattern.  They mounted broad-front assaults.  Instead of concentrating their armor, they spread it along the line.  Whenever they broke through lines they insisted on reducing resistance in every strong point they encountered.  This gave the Nationalists ample time to mount a counter attack.  As a result they failed miserably in their attacks.

What is even more telling is that they failed to learn and adapt their strategy.  The Communist Commissars were more motivated to spread positive propaganda than to learn from mistakes.  As a result they painted defeats as victories.  When defeats could not be presented as victories they assigned blame to anyone but the Russians.  The outcome of this delusional approach was that the Russians continued with these tactics through the Second World War.  Millions of Russian soldiers died because Generals would not admit their strategies were at fault.

In a business context, if you are not the dominant player, there is a danger that you are reacting to the moves of the Gorilla in the market.  If you are dancing to a tune played by the big player you will never overtake them.  You must own your own strategies.  If you are the dominant player you must not fall into the trap of becoming entrenched and defensive in nature.  This will allow smaller players to nibble away at your share.

Before Action ; by William Noel Hodgson

… I, that on my familiar hill
saw with uncomprehending eyes
a hundred of Thy sunsets spill
their fresh and sanguine sacrifice,
ere the sun swings his noonday sword
must say good-bye to all of this;
by all delights that I shall miss,
help me to die, O Lord.

Hodgson’s last poem, written on the eve of the Battle of the Somme in which he died.