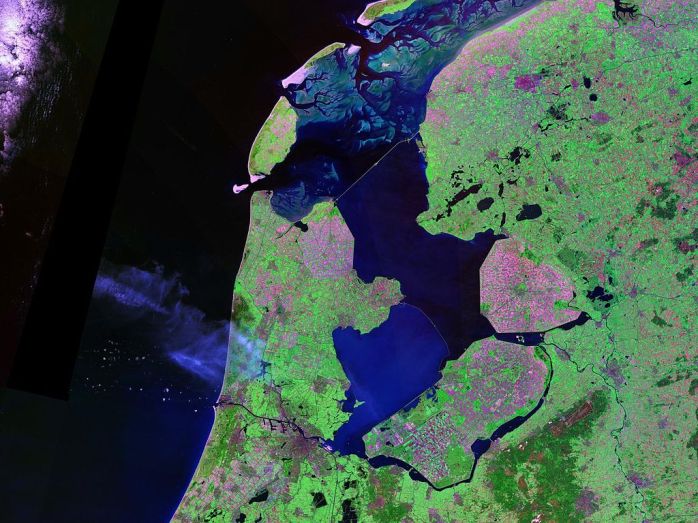 When is a disaster not a disaster?  When you are on the silver lining side of the cloud!

Back in 1287 Amsterdam was a backwater fishing village on the wrong end of the large freshwater lake called the Zuiderzee.  The prosperous towns in the Netherlands lay on the river Vlie where the lake discharged into the North Sea.  Out there they could trade with the Germans, the Danes, the English, the French, the Norwegians and the Swedes.

On the night of St Lucia Day a North Sea depression set up a storm surge on top of a high tide.  On the 14th of December 1287 the sea smashed through the dunes and the boulder clay, obliterating the river Vlie and the towns on its banks.  The sea then surged into the lake and converted it to a salt water lagoon.  Some 50,000 to 80,000 Dutch and Germans died in the floods.

Backwater Amsterdam woke up to find itself positioned perfectly on a huge natural harbour with access to the North Sea.  By 1303 the village on the Amstel river had become a City.  It is today the most populous City in the Netherlands.

Long time ago, from Amsterdam a vessel sailed away,
as fair a ship as ever flung aside the laughing spray.
Upon the shore were tearful eyes, and scarfs were in the air,
as to her, o’er the Zuyder Zee, went fond adieu and prayer;
and brave hearts, yearning shoreward from the outwardgoing ship,
felt lingering kisses clinging still to tear-wet cheek and lip.
She steered for some far eastern clime, and, as she skimmed the seas,
each taper mast was bending like a rod before the breeze.

Scholar, Knight, Diplomat, Traveller, Linguist, Poet, Politician, Advisor to Queen Elizabeth, Master of Ordnance, Soldier; shot in the leg in the battle of Zutphen in the Netherlands during the 80 years war against Spain.  An avid proponent of the Protestant cause.  He died aged only 31 from gangrene.  Born November 30th, 1554.  A true renaissance man.

The Bargain; by Sir Philip Sidney

His heart in me keeps him and me in one,
my heart in him his thoughts and senses guides:
He loves my heart, for once it was his own,
I cherish his because in me it bides:
My true love hath my heart, and I have his. 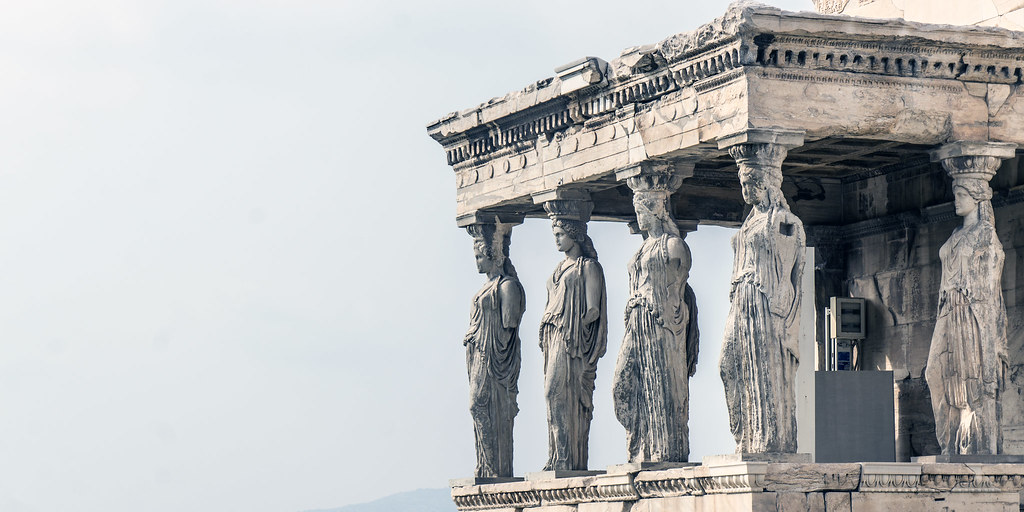 The matronly women supporting the portch of the Erechtheion on the Acropolis of Athens are the model for most of the Caryatids we know.  Stautesque, strong, solid pillars of the community.  Nothing flighty about these ladies.

There is some debate around the origin of the Caryatid.  In some theories they represent women from the Greek town of Carie near Halicarnassus (modern Bodrum in Turkey).  The town sided with the Persians and when the town fell the women became captives.

Another theory is that they represent dancers in a religious rite to celebrate Artemis.

Whatever the truth in reality generations of matronly women were condemned to a fate similar to Atlas, who supported the sky.  These ladies were fated to bear great stones on their heads.

The giant Caryatids of Winkel Van Sinkel (1839) in Utrecht are nicknamed “The English Whores” or the “Fallen English Women”.  Cast in England they broke the crane offloading them from the ship on which they were transported.

Until the arrival of Auguste Rodin, born November 12th 1840.  Rodin was the sculptor who did to materials what the impressionists were doing to paint, and light, and colour.  Rodin smashed convention.

To my mind his greatest success was with the Fallen Caryatid, exhibited in 1886.  Gone is the solid older woman.  Here is a beautiful young girl.  She has collapsed beneath the weight of the stone.  But it takes no more than a glance to know that it is not the physical weight that overcomes her.  She carries an emotional weight, her despair may be with the world at large or a matter of the heart.  Is this why the role of the Caryatid was heretofore entrusted to older women, matrons done with the emotional rollercoaster of youth?

In that torture of emotions we write our own stories, as Robert Heinlein did in the quote below.  That engagement, our personal investment in an object, is the mark of great art.

“This poor little caryatid has fallen under the load. She’s a good girl—look at her face. Serious, unhappy at her failure, not blaming anyone, not even the gods . . . and still trying to shoulder her load, after she’s crumpled under it. But she’s more than good art denouncing bad art; she’s a symbol for every woman who ever shouldered a load too heavy. But not alone women—this symbol means every man and woman who ever sweated out life in uncomplaining fortitude until they crumpled under their loads. It’s courage, Ben, and victory.”

“Victory in defeat, there is none higher. She didn’t give up, Ben; she’s still trying to lift that stone after it has crushed her. She’s a father working while cancer eats away his insides, to bring home one more pay check. She’s a twelve-year-old trying to mother her brothers and sisters because mama had to go to Heaven. She’s a switchboard operator sticking to her post while smoke chokes her and fire cuts off her escape. She’s all the unsung heroes who couldn’t make it but never quit. Come. Salute as you pass…”

On this day in 1338 a French fleet of galleys attacked a flotilla of five large carracks out of England.  The English were carrying a large wool cargo purchased by Edward III to trade in the Netherlands.

England made good money in the middle ages exporting wool to Europe.  Flanders was the hub of cloth production in Northern Europe.  They converted the raw wool bales into fine cloth carrying out the carding, spinning, dyeing and weaving before passing it onwards for a hefty profit.

The huge French fleet swept down on the English at Arnemuiden in Flanders when they were unloading the cargo.

The English fought back bravely.  John Kingston, captain of the flagship, the Christopher, had three cannon and a handgun on board.  It is the first recorded use of artillery in a European naval battle.

Carracks are sailing vessels, easily outclassing galleys in the open sea, but no match for them in a tight harbour.  The huge French fleet overwhelmed the English, seized the ships and cargo and slaughtered the prisoners.  This was the opening naval action of the 100 years war.

She’d bring to me a skein of wool
And beg me to hold out my hands;
so on my pipe I cease to pull
And watch her twine the shining strands
Into a ball so snug and neat,
Perchance a pair of socks to knit
To comfort my unworthy feet,
Or pullover my girth to fit.

As to the winding I would sway,
A poem in my head would sing,
And I would watch in dreamy way
The bright yarn swiftly slendering.
The best I liked were coloured strands
I let my pensive pipe grow cool . . .
Two active and two passive hands,
So busy wining shining wool.

Alas! Two of those hands are cold,
And in these days of wrath and wrong,
I am so wearyful and old,
I wonder if I’ve lived too long.
So in my loneliness I sit
And dream of sweet domestic rule . . .
When gentle women used to knit,
And men were happy winding wool.

One swallow doth not a summer make.  Although the Duke of Marlborough won a great victory at Blenheim in 1704 in the war of the Spanish Succession, he was unable to capitalize on it in 1705.  Given a year to recover his position Louis XIV felt he could at the very least bargain a better peace if he made a military demonstration.

With this in mind in the Spring of 1706 he launched campaigns in Italy and Germany with some success.  On the back of the early gains he launched Marshal Villeroi from Leuven into the Netherlands.  At Ramillies he met John Churchill, hungering for an opportunity to deal decisively with the French.

The French, Spanish & Bavarian alliance collided with Churchill’s English, Scottish, Dutch and Danish army on open flat farmland near the village of Ramillies.  The ground was a flat canvas, the perfect medium on which a skilled general could dictate a battle.  In four hours the Duke of Marlborough demonstrated why he was the greatest general in the world in his day.  23rd May is the anniversary of the battle.

The beauty of such a decisive win early in the campaign season is what happened next.  Malines, Lierre, Ghent, Alost, Damme, Oudenaarde, Bruges, and on 6 June Antwerp, all subsequently fell to Marlborough’s victorious army.  The Spanish Netherlands was Spanish no more.

I wrote this post last night, before the news leaked through of the explosion at the Manchester arena.  This morning we hear that 22 people lost their lives and over 50 have been injured in a suicide bomb blast.  Some of the casualties were children, which is no surprise in the audience of the Ariana Grande Dangerous Woman show.  A lone suicide bomber was responsible.

I hate to jump to conclusions without the full facts, but it has all the hallmarks of Islamic extremism.  John Churchill, the Duke of Marlborough, had the benefit of a defined enemy with stated aims.  His opponents decked their troops in uniforms and lined them up on fields of battle.  Islamic extremists have no country.  Their aim appears to be the destruction of all that is not Islam.  They are happy to die to achieve this aim and have a constant supply of suicide bombers.  They are happy to slaughter innocent children to pursue their goals.  They are happy to recruit impressionable teenagers, and indoctrinate them in madrasas converting them into weapons of flesh and bone.  How do you deal with such people?

I think Ariana Grande herself said all that can be said: