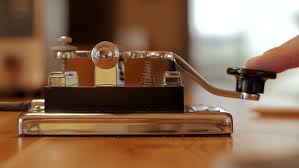 You can convert this online if you can’t read dots and dashes.

Morse code, the simplest, if very long winded form of electronic/radio signalling.  Can be replicated using signal lights also.  Takes very little bandwidth.  Morse code is not dead yet, and may never be.

I love the story of Morse code and Baltimore in West Cork, Ireland.  In the days of transatlantic sailing the ships from Britain, France, Germany and the rest of Europe left via the “Western Approach” which skirted the south west coast of Ireland.  One of the earliest telegraph lines in Ireland ran from Dublin to Baltimore in West Cork.  An early submarine telegraph ran across the Irish Sea and connected West Cork to the London Market.

Packages were telegraphed to Baltimore in West Cork by Morse Code.  They were pasted onto letters, and placed in the mail.  Then a pilot cutter would sail out to the departing liners and deliver the very last mail to the ships for the New York market.

When the Liners arrived from New York they placed their urgent letters on the pilot cutter on the way East.  The boat sailed into Baltimore and the messages were telegraphed to London.

The local business people in Baltimore realised that for a short few years, before a working transatlantic cable was laid, they lived on a gold mine.  A smart businessman with a fat pocket and a trading account could make a lot of money by buying the right stocks and shares before the news reached the markets.  The smart businessmen living in Baltimore made sure their telegraphs to London arrived on the trading floor before the news from New York.  In the process some fat pockets got even fatter.

A poor telegraph operator might open the mail packets and slowly stack them up in preparation for sending them.  He might then wait for ten minutes while a smart businessman wrote an instruction and put it to the front of the queue.  I’m pretty sure the poor telegraph operator was rewarded handsomely for the favour.  That would be pretty standard good neighbourliness in a place like West Cork.