My mothers birthday is shrouded in mystery.  The selection of her birth date is a bit along the lines of what the Christians did when selecting year 1 AD.  It is the first year in which they could categorically say that Jesus was alive.

So 13th October is officially Maura’s birthday, but unlikely to have been her birth date.

It is poignant in being the day before Paddy’s anniversary.  Maura was born in 1927.  Paddy was also born in August of the same year, and passed away Oct 14th 2006.  Maura hung on in there until Christmas Eve 2016. 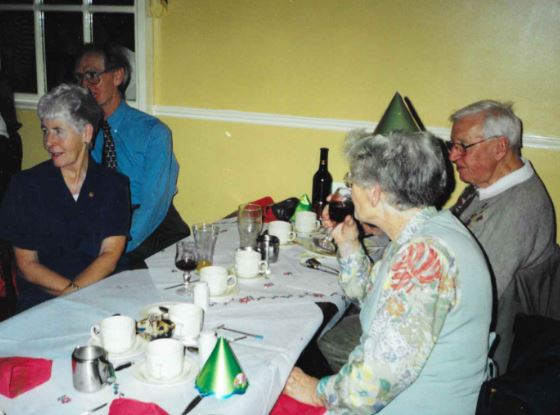 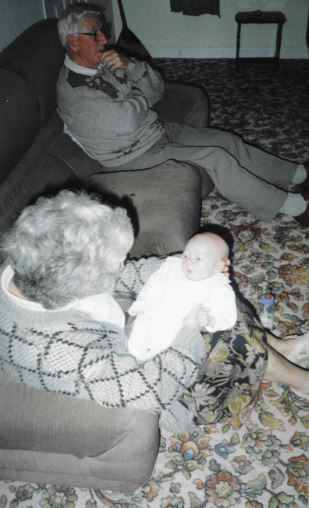 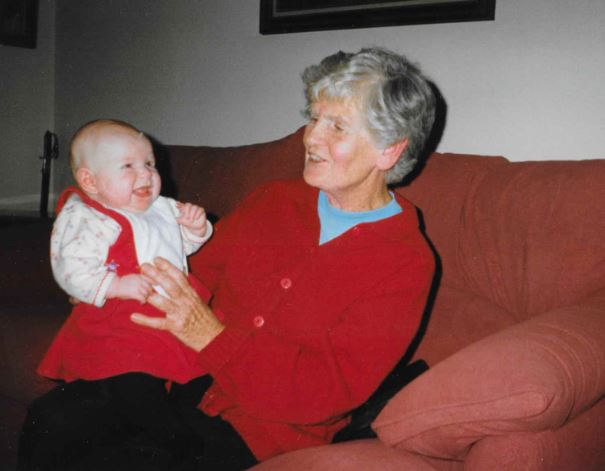 Maura having a laugh with Esha 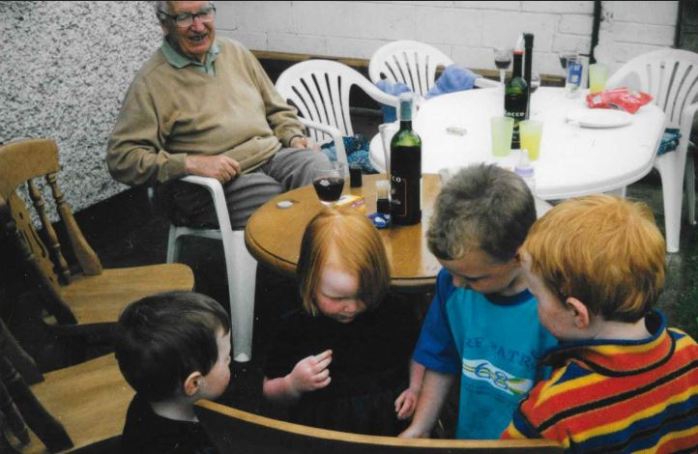 Paddy at one of the kids birthday parties.

Maura with Gavin decked out in the Christening Robes 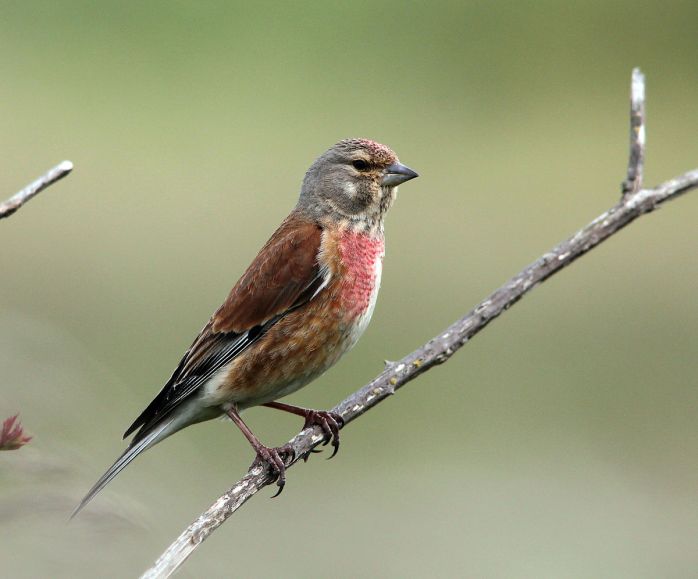 As a small boy I remember my dad bringing us to the Bird Market in Dublin City on a Sunday morning.  Back in those days in the 1960’s you could buy wild songbirds that people trapped in the countryside.  I remember seeing Goldfinches, Chaffinches, Bullfinches and Linnets amongst the Budgies and Canaries.  I don’t know if they still do that, and I hope not.  The wild birds are under too much pressure as it is.

But the market is still there.  A quick scan of the Internet tells me it still convenes on Sunday Mornings in Peter Street, near St Patrick’s Cathedral.

We used to have birds as pets.  I believe we had a linnet once but I don’t remember it.  I do remember a budgie.  My enduring memory is of its rigid dead corpse lying in the bottom of the cage.  Beautiful plumage.

So to a poem and since today is the birthday of Walter De La Mare let’s have a Linnet from him.  The Linnet is a finch who gets his name for his penchant for Flax seeds.  Flax plants are the key ingredient in linen, hence the Linen Finch, or Linnet.  One of the seven subspecies of Linnet was registered by the Scottish ornithologist Philip Alexander Clancey, probably a relative of my dad.

Upon this leafy bush
with thorns and roses in it,
flutters a thing of light,
A twittering linnet.
And all the throbbing world
of dew and sun and air
by this small parcel of life
is made more fair;
as if each bramble-spray
and mounded gold-wreathed furze,
harebell and little thyme,
were only hers;
as if this beauty and grace
did to one bird belong,
and, at a flutter of wing,
might vanish in song. 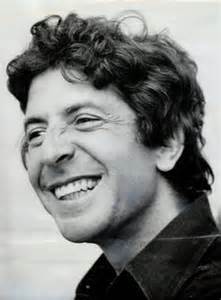 Born on this day in 1934, passed away in 2016, the legend that was Leonard Cohen.  Singer, songwriter, poet, philosopher.  Happy Birthday Len.

My favourite memory is when I was in school or college and living at home in my parents house.  I was up late with a couple of friends and we were listening to music.  Leonard Cohen’s “Famous blue raincoat” which opens with the lyrics

It’s four in the morning, the end of December
I’m writing you now just to see if you’re better

When my dad came thundering into the room and said “this is ridiculous, you are up too late keeping the house awake.  For God’s sake it’s four in the morning!” and he was then stunned when we cracked up and fell around laughing.

The Future: by Leonard Cohen

Now in Vienna there are ten pretty women.
There’s a shoulder where death comes to cry.
There’s a lobby with nine hundred windows.
There’s a tree where the doves go to die.
There’s a piece that was torn from the morning,
and it hangs in the Gallery of Frost—
Ay, ay ay ay
Take this waltz, take this waltz,
take this waltz with the clamp on its jaws.

There’s a concert hall in Vienna
where your mouth had a thousand reviews.
There’s a bar where the boys have stopped talking,
they’ve been sentenced to death by the blues.
Ah, but who is it climbs to your picture
with a garland of freshly cut tears?
Ay, ay ay ay
Take this waltz, take this waltz,
take this waltz, it’s been dying for years.

There’s an attic where children are playing,
where I’ve got to lie down with you soon,
in a dream of Hungarian lanterns,
in the mist of some sweet afternoon.
And I’ll see what you’ve chained to your sorrow,
all your sheep and your lilies of snow—
Ay, ay ay ay
Take this waltz, take this waltz
with its “I’ll never forget you, you know!”

And I’ll dance with you in Vienna,
I’ll be wearing a river’s disguise.
The hyacinth wild on my shoulder
my mouth on the dew of your thighs.
And I’ll bury my soul in a scrapbook,
with the photographs there and the moss.
And I’ll yield to the flood of your beauty,
my cheap violin and my cross.
And you’ll carry me down on your dancing
to the pools that you lift on your wrist—
O my love, O my love
Take this waltz, take this waltz,
it’s yours now. It’s all that there is. 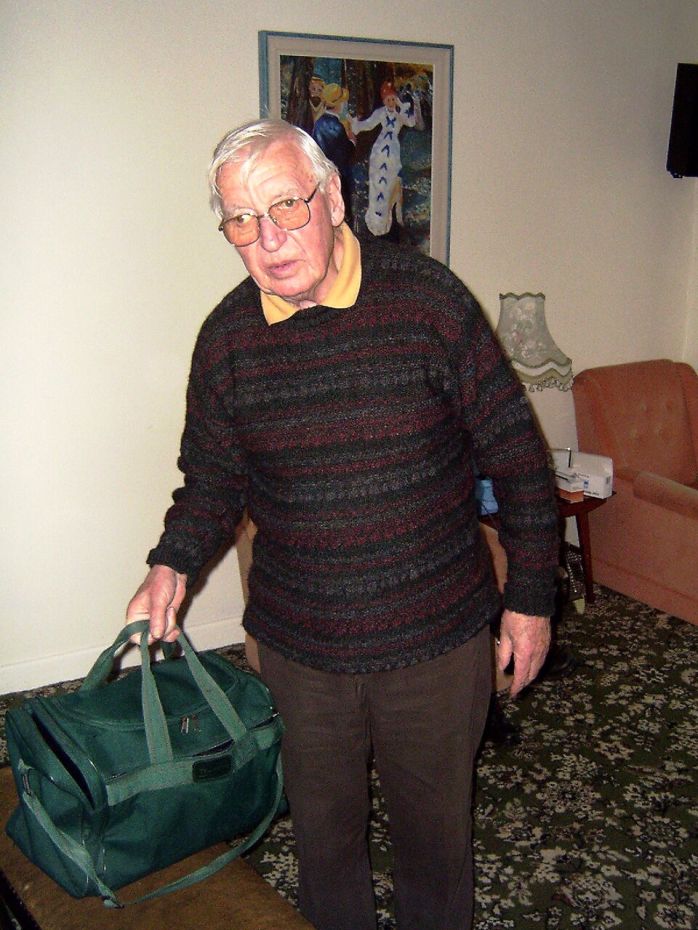 My dad passed away in October 2006.  That is significant because it predated the smartphone.  In those days cameras on phones were a new and expensive add on.  As a result most of the photos of Paddy are old style paper photographs, and there are not many digital ones.  I never got around to scanning all my old paper photos, but I managed to find this one in my archives.

Paddy and Maura were preparing for a trip.  It may have been the holiday they took in Dubrovnik.  I know this because my dad was doing up his cabin bag when I took the photo.  Paddy was the ultimate boy-scout, being prepared for every eventuality.  It was a product of his upbringing in a military household.  On camping holidays when anything broke Paddy had a spare in his “magic box”.  His in-flight bag was a treasure trove of travel “must-haves”.

My parents grew up during WW2, or “the emergency” as it was called in Ireland.  Born in 1927 they were 12 when the war began.  Ireland suffered a similar rationing regime to Great Britain, which meant frugality and food discipline was central to their lives from age 12 to around age 20 when rationing eventually tailed off.  They never lost their discipline in relation to waste.

Here is a story that illustrates their mindset.  When they were newly married my father bought a good coat for his wedding.  It was a fine heavy wool tweed coat.  Good Donegal tweed is tough stuff and lasts many years.

Over time the coat began to wear and my mother had to turn the cuffs and put in some repairs.  Eventually Paddy said it looked too shabby to wear.

Maura agreed, so she took the coat apart, panel by panel, and reversed the material and made up the coat again.  She put in new lining and the whole garment looked brand new.

When you turn the fabric it looks fine for a while, but it is worn thin and within a short few years the coat looked beat again.  Paddy said “Maura, this coat is finished, I need to buy a new one.”  Maura looked it over and sadly agreed.  “Yes” she said, “it’s finished, you can’t wear that any more…….I’ll cut it down to make clothes for the children”.

Were he still with us Paddy would be 90 today.  My dad shares his birthday with William Ernest Henley (b. 1849), the Victorian poet made famous all over again by Nelson Mandela.  Mandela would read “Invictus” to his cellmates in their darkest days.  He gave the poem to the South African Rugby Union team in 1995 to spur them on to win the Rugby World Cup for the new South African Nation.  Clint Eastwood directed Matt Damon as Francois Pienaar, the Springboks captain, and Morgan Freeman as Mandela in the 2009 movie centred on that poem.  Here is another from Henley more along the theme of “Gather ye rosebuds while ye may”.

Oh gather me the rose; by William Ernest Henley

O gather me the rose, the rose,
while yet in flower we find it,
for summer smiles, but summer goes,
and winter waits behind it.

For with the dream foregone, foregone,
the deed foreborn forever,
the worm Regret will canker on,
and time will turn him never.

So were it well to love, my love,
and cheat of any laughter
the fate beneath us, and above,
the dark before and after.

The myrtle and the rose, the rose,
the sunshine and the swallow,
the dream that comes, the wish that goes
the memories that follow!