The boat that never sailed; by Alban Wall

Down in the harbour of Broken Dreams

On the shores of Yesterday,

Her hull half-buried by sands of Time,

A schooner lies rotting away;

And her broken beams are the broken hopes

Of plans that have somehow failed –

Past a boat that has never sailed.

Her timbers were made of the finest wood

From the forests of Caribee;

That glide o’er the southern sea;

And her decks how they echoed her builder’s song

As he fashioned her, plank and nail –

Now only the seagull’s lonesome cry

Haunts the boat that has never set sail.

She never answered the siren call

Of coaxing wind and tide;

She never breasted the Spanish Main

With the seas coming over her side;

And the pennant that hangs from her broken mast

Never shook in the lashing gale –

For the tides of Destiny waxed too full

And the schooner never set sail.

Somewhere there are men with snow-white hair

Who sit in life’s twilight years,

And often their thoughts drift wistfully back,

And often their eyes fill with tears

As they think of the dreams that have gone astray

And the plans that have somehow failed –

God, heal the hearts of the men who have built

The boats that have never sailed.

Long and busy weeks these days with little time for selfish distractions.  The blog is suffering.  My little Mind Ship is careened in the mud on some foggy leeward shore waiting for a good scrape and a change in the wind.

I love those old engraved prints of the days of sail, which show harbors bursting at the seams with ships and boats.  But like a Ryanair plane on the tarmac, a ship locked in harbor is a useless asset.  The trick is to flow in on the tide, unload your cargo, load a new one and be gone on the ebb.  Those harbors packed with ships are monuments to stranded productivity.  They need the right wind and tide to make sail.

Sail ships were doomed as soon as steam was viable.  Why wait a week for a favorable wind when a steam boat can cast off into a headwind?  There is no romance in business, only cold hard brass.  At first they used steam tugs to haul the great sail ships in and out of harbour to find a wind.  Then the complimentary technology became the competition.  Tugs were redesigned to operate as barges on canals and rivers, bigger versions became river and lake boats.  Ultimately the noisy, smelly, dirty vessels even replaced the glorious tea clippers, the zenith of sail trader design, the greyhounds of the sea.

I need a cargo and I need it now.  I need a shift in the wind and a good tide.  I could use a bit of power instead of sail.  I need to get off this desolate shore.  I need a touch of magic.

So, how do I unite a steam ship, a touch of magic and a poem about riding at dawn – ah, a cauldron.  Ships boiler, witches pot and the eye of the sun.

Then the substanceless blue

Pour of tor and distances.

How one we grow,

Pivot of heels and knees!—The furrow

Splits and passes, sister to

Of the neck I cannot catch,

Hauls me through air—

Flakes from my heels.

Foam to wheat, a glitter of seas.

Melts in the wall.

The dew that flies

at one with the drive

Eye, the cauldron of morning. 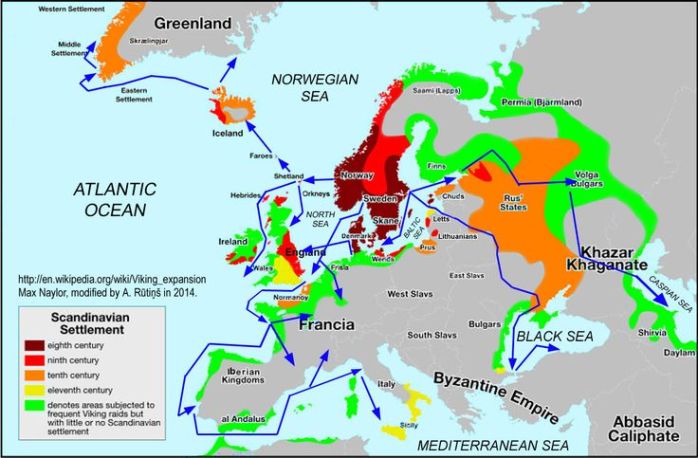 What unites Ireland with Shetland, the Faroes with Kiev, Novgorod with Greenland, Iceland with Denmark?  Vikings.  They founded the cities of Ireland, they ruled Britain for a time, they landed in America and they founded Russia.  Rurik the Varangian founded Russia.  In Ireland we have the name Rory, or Ruairi, meaning “red headed”.

Red hair is a genetic mutation which survives in the north atlantic region because it imparts an advanage to us red heads.  We don’t suffer from Vitamin D defficiency.  We don’t get rickets from lack of sunlight.  We can metabolise enough vitamin D through weak sun exposure on our faces and hands to see us through the darkest winters.

Of course the downside is that we fry alive in sunshine.

Varangian was the greek name for Vikings.  The emperors of Byzantium were protected by a guard of varangians.  Many is the good Viking who made his fortune in Constantinople, the second Rome.  Vikings could be trusted to guard the emperor, because they were outside of the usual Greco-Roman politics.

Harold Hardrada was a Viking of the Varangian guard.  He made his money, returned to Norway and invaded England in 1066.  Defeated at the battle of Stamford Bridge by Harold Godwinson, king of saxon England.  Godwinson was subsequently slain at Hastings in the same year when an arrow pierced his eye.  Enter the Norman invasion!

I digress.  Let’s go back to Russia, Rurik the redheaded Viking, who founded the now largest country in the world.  Russia, an enormous landmass, and yet a country with a yearning for the sea.  A country that looks at the world through the window of St Petersburg and holds jealously to the exclave of Kaliningrad.  Survived the second world war by holding open Archangel and Murmansk to the Arctic Convoys.  A country that fought for the Black Sea ports in the Crimean War, which gave us the Charge of the Light Brigade, and again in World War 2 when the Crimea again became a key battleground.  Japan defines the modernisation of its navy at the battle of Tsushima, and Sakhalin and Vladivostok continue to represent a strategic Russian Presence in the Pacific.  So Russia commands ports on the Arctic and Pacific Oceans, the Black, the Baltic and the Caspian Seas as well as the sea of Japan.

Russia, the largest land country in the world, is in fact a maritime state.  Russia is a child of the Vikings.  No surprise then that if you ask a Russian to recite a poem, most of them can remember one about a sail.  And if you ask them to sing a song, many will give you the Song of the Volga Boatmen.  безопасное путешествие.

The Sail:  Mikhail Lermontov (Translated by the Author)

In the haze of the light blue sea.—

What seeks it in countries far away?

What in its native land did leave?

The mast creaks and presses,

The wind whistles, the waves are playing;

Alas! It does not seek happiness,

Nor from happiness is fleeing!

Beneath, the azure current flows,

Above, the golden sunlight streaks:—

But restless, into the storm it goes,

As if in storms there is peace!