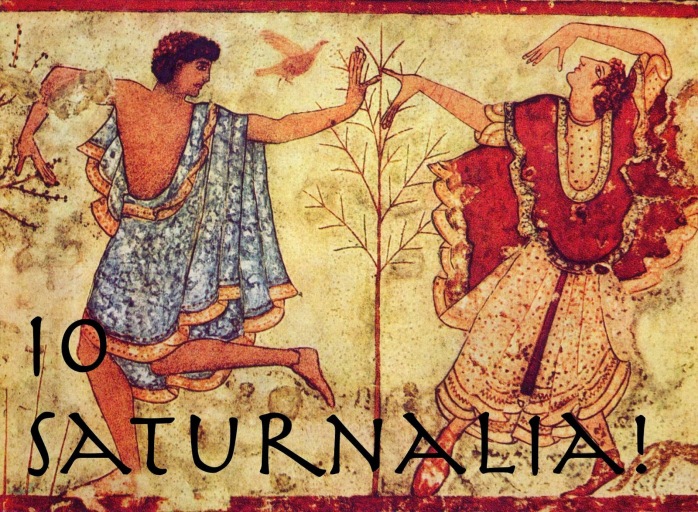 Beginning on Dec 17th, the Roman Festival of Saturnalia was a time to upend conventions.  Things that were illegal at other times of the year were permitted during the festival of Saturn.  Sumptuary laws were broken to permit feasting and public drunkenness.  It was time to party, party, party.  Gambling was permitted.

It was also a great time for people who were normally constrained by their place.  Women could let loose.  Slaves and servants were given pride of place and were served at table by their masters.  There was liberty for wives to tell the truth to husbands and for slaves to berate their masters.

Role reversal and guising were commonly practiced and these elements have become key components in our modern Christmas Panto.  In pantomime the lead boy is often played by a woman, the dame is played by a man.  Mistaken identity and upending of norms, where the pauper marries the princess are common themes.

Saturnalia was a festival of light centred around the week of the winter solstice.   It involved bringing evergreen foliage into the house and using it to decorate the walls, symbolic of protecting the kindling.  From this tradition we get the modern fashion for bedecking our halls with the holly and the ivy.

Candles were burned through Saturnalia as symbols of knowledge and learning, and translated into the current practice of lighting up homes for Christmas with coloured lights.

During Saturnalia work stopped and schools closed, to give people a holiday period, just as today.

Citizens put aside their togas and dressed instead in colourful greek outfits that were bright and garish.  A bit like we do today by wearing gaudy cheesy Christmas jumpers.

Citizens, who normally walked bare headed, would doff a pilleus, a pointy felt cap usually worn by freedmen.  Next time you are at the office christmas party and find a pointy cap on your dinner place setting you will know it is designed to reduce your status, and make all of you equal for the party.

Romans also had a tradition of gift giving for Saturnalia that we have translated to the notion of Santa Claus.

Ever wonder where the tradition of sending Christmas cards came from?  You got it!  It’s another Saturnalia custom.  As with the verse below from Catullus Romans would send each other verses of poetry for the holiday.  This year I revived something of the Roman tradition by sending framed poems to my family and to SOME friends.

If I didn’t love you, sweet teasing Calvus,
far more than my own eyes, then for today’s gift
I’d hate you with the hate of Vatinius;
for what have I said or done to deserve it
that you’re killing me now with all these poets?
May the gods frown down on whichever client
settled accounts with this roll of miscreants
(unless, as I suspect, it’s that school-master
Sulla, writing off debts by setting these texts,
then I bear no hate, have no complaint to make:
at least your hard work receives due recompense).
God, here’s as cursed a verse as one might expect –
a book, I know, you sent to your Catullus
to finish him off, to floor and to bore us
on Saturnalia, our day for pleasure.
No, not so fast, you can’t escape, my false friend,
for if this long night of torment ever ends
I’m off to the bookshops to buy Caesius,
Aquinus and Suffenus, all poison pens,
to pay you back in full for your own torture.
Until then, goodbye, farewell, it’s time to quit:
let those bad feet limp away, lines and couplets,
disease of the age, unreadable poets.

December 17th is the Roman feast of Saturn, the Saturnalia.  Over the years it expanded to become an entire week of festivities.

During Saturnalia all the conventions of Rome were thrown aside.  It was the Roman Version of the Dionysian Mysteries.  But the Roman festival seems to have been far earthier, and a lot more fun.

Masters became the servants.  Women acted like men.  Rules around what you could eat or drink or how to behave were thrown away.  Chaos and fun were the order of the day.

From Saturnalia we get one of our most enduring Christmas traditions, the Pantomime.  The male hero is played by a woman.  Dames are played by men.  Farce and comedy are feted in place of po-faced theatre.  There are no seats for litterati at the panto.  It is owned by children, small ones and big ones.

It is a tried and true formula.  The good guys always triumph, the guy gets the girl and there are no nasty surprises.  “He’s behind you!”

The Pantomime – A Humorous Poem -by Blackangelwings

I’ll boo if I want to
I’ll jump up and down
I’ll hiss at the Stepmother
And laugh at her crown.

I’ll be the first to scream
When a cow is sold for beans
I’ll tremble at the Giant’s voice
When Jack escapes, I will rejoice.

I’ll scramble for sweets
That Seven Dwarfs throw
I won’t push over children
It’s rather naughty I know.

As children to the woods are banished
My inhibitions tend to vanish
As a glass slipper is forced on willing toes
I’ll shout ‘She’s behind you’ wherever the Evil Dame goes.

I won’t give a care
When adults turn to stare
I’ll laugh at the old gags, they’re always the same
I’ll be jolly and excited, so very glad I came.

Maybe I’ll stay in my seat
If the interval provides a fluorescent treat
A glowing wand this year
As previous swords made me reckless, I fear.

I won’t whistle at the Principle Boy
You told me Santa would take back a toy
I’ll cheer as a Prince so brave
Breaks the curse of a glass coffin grave.

When Witches appear I’ll roar out a boo
I promise not to swear or turn the air blue
As Ugly Sisters pull up their chests
I’ll just giggle and won’t be a pest.

I’ll journey on a carpet somewhere nice
I won’t heckle the Genie or give my advice
I may weep a bucket full of tears
As into Snow White’s mouth a poisoned apple disappears.

This Pantomime time
I won’t commit the crime
Of running down the aisle
Two steps at a time.

I won’t even jump on the stage this year
I’ve heard of Health and Safety fears
I must admit though, I’ll miss all the attention
It’s far more fun than collecting my pension!

Roll on the next significant day – The Lord of Misrule.  December 17th is the first day of the Roman festival of Saturnalia.  It was a period of great  feasting and festivity, with a lot of drinking and eating.  Slaves would become masters for the festival, and everything was turned upside down. This tradition of turning everything on its head survives to this day.  We call it the Christmas Pantomime.

Properly played out the lead man in panto is played by a woman and the grand dame is played by a man (or men in the case of Ugly Sisters).  Pantomime usually involves the triumph of the small over the great.  Aladdin and Ali-Baba become fabulously rich and win the girl, Peter Pan defeats Hook, Cinderella marries the prince etc.  The low born servant exchanges places with the highborn lord.

Then you leave the theatre and realise it is all illusion.  A mad, chaotic dream of what might be, but never will.  Order reasserts itself and the world is set to rights.  Time marches on to the winter solstice and the turning of the year.

Unfathomable Sea! whose waves are years,

Ocean of Time, whose waters of deep woe

Are brackish with the salt of human tears!

Thou shoreless flood, which in thy ebb and flow

Claspest the limits of mortality!

And sick of prey, yet howling on for more,

Vomitest thy wrecks on its inhospitable shore;

Treacherous in calm, and terrible in storm,

Who shall put forth on thee,