When I was a child dyslexia and other learing difficulties were all lumped together and labelled as stupidity.  What was worse is that instead of trying to “help” so called stupid children the teaching model was to punish these children.

This was not for “bad behaviour”.  This was for getting questions wrong.  And many of these kids could seldom get a question right.  When they looked at a page of text they saw something like this: 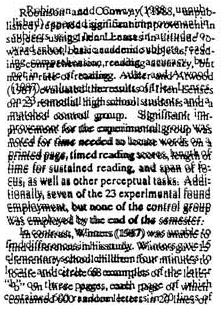 Thank goodness now we understand that genuine stupidity is rare and unfortunate.  Most kids who struggle to learn in traditional modes have some type of learning difficulty.  In the right environment, with the right diagnosis and the right teacher they shine through.

I went on to do some mentoring of kids with learning difficulties.  Reading with one young lad who had dyslexia showed me that when he looked at a word he saw it upside down and backwards at first glance.  The word “WAS” looked to him like “SAM”.  But more damaging to him than that glitch was the dent in his confidence and it was a pleasure to help him build it.

Later I did some teaching at 3rd level.  I began to spot clues that some students were using practiced techniques to overcome issues.  Widespread use of different coloured pens is a pretty good indicator.  But what impressed me about dyslexic students was the clarity they brought to their answers.  They could not disgorge 5 foolscap pages of waffle on an answer, but they communicated the vital elements of their understanding of the subject in one or two well thought out and clearly crafted pages.  Less is more.  Say little but say it well.

A perfect example is this poem.  Posted on Twitter by Jane Broadis @Jb5jane it is from one of her 10 year old students.  AO wrote a poem that can be read from top to bottom or from bottom to top.  Personally I prefer bottom to top.  It is a work of genius. 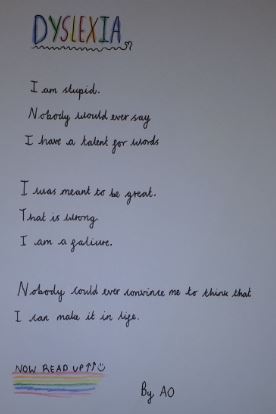 For those with old eyes I’ll type it out here:

Nobody would every say

I have a talent for words

I was meant to be great

I am a failure

Nobody could ever convince me to think that

I can make it in life.