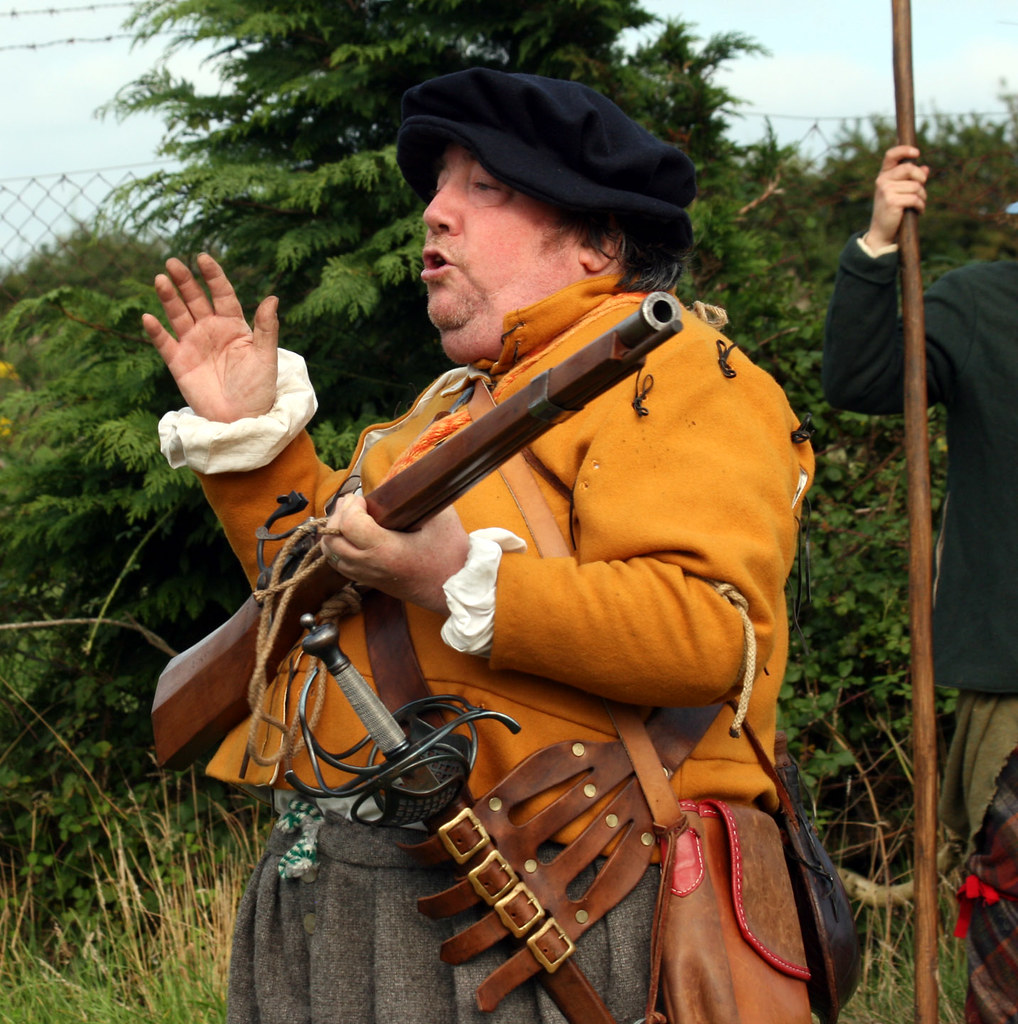 In the USA the Battles of Saratoga were a vital step for the American cause.  An army of mostly irregular colonists took on the professional British Army and defeated them.  They did this through a combination of British arrogance, knowledge of the terrain and superior marksmanship.  The US frontiersmen with their Kentucky rifles, using natural cover, were more than a match for the British regulars with their smoothbore brown bess muskets.

In Ireland in 1598 the Ulster Irish led by Hugh O’Neill and Hugh O’Donnell won a similar victory at the Battle of the Yellow Ford.  The Elizabethan British Army of occupation built a fort on the Blackwater in Armagh to threaten Ulster.  The Ulster forces quickly placed it under siege.

The British led a relief force under Sir Henry Bagenal, an experienced commander of veteran troops.  The British were heavily armed and armoured.  They had better cavalry than the Irish and carried a heavy arquebus or musket, which required a supporting pole to steady it for firing.  The Musketeers supported by pikemen in the tradition of the day.

The Irish were actually better armed.  O’Neill was famous for the tricks he used to circumvent restrictions on his ability to recruit and arm his men.  He was permitted a personal bodyguard of only 600 men.  So he rotated them every 6 months and trained them relentlessly to build an army of over 5,000.  He imported lead to waterproof the roof of his castle, and turned it into shot.  Most importantly he sourced the very latest and lightest arquebuses, called Claviers (a corruption of the word Caliber – because they were of standard bore)

Using terrain features and pre-constructed ditches and banks the Irish harried the British from cover very much as the Americans would do hundreds of years later.  When the British came within sight of the Blackwater fort the defenders cheered and tossed their caps in the air in celebration.  The British infantry moved strongly forward over the Yellow Ford.

Then the Irish struck at the rear of their formations, smashing the British from behind.  The leading regiments were forced to retreat to protect themselves and the retreat turned into a desperate defence.  In the panic that ensued a British Infantryman ran to refill his powder horn from a barrel of gunpowder.   He was holding a lit match in his hand and set off the powder in a massive explosion.

The British were harassed all the way back to the River Callan, and there someone on the British side had made a smart decision to position some artillery pieces in a fallback position.  They were able to hold the Irish and prevent a complete slaughter.

Of 4,000 British Soldiers only 2,000 made it back to the garrison of Armagh.  After some negotionation they were permitted to return south only by leaving behind all their arms and ammunition.

It would be nice to say that the outcome of Yellow Ford was similar to the outcome of Saratoga, but it was not to be.  The Americans had the French to support their revolutionary war.  The Irish had the Spanish, who landed in Kinsale, the furthest possible point away from the Ulster strongholds of O’Neill and O’Donnell.

At the Battle of Kinsale the Irish & Spanish forces were defeated by the British and the result was the “Flight of the Earls” when O’Neill and O’Donnell departed Ireland with their retinue for exile in Spain.  Their departure opened Ulster for Plantation by protestants loyal to the British Crown, a move that is reflected in the politics of the Island of Ireland to this day.

Mine eye and heart are at a mortal war
how to divide the conquest of thy sight;
Mine eye my heart thy picture’s sight would bar,
my heart mine eye the freedom of that right.
My heart doth plead that thou in him dost lie
a closet never pierced with crystal eyes.
But the defendant doth that plea deny
and says in him thy fair appearance lies.

To ‘cide this title is impanneled
a quest of thoughts, all tenants to the heart,
and by their verdict is determined
the clear eye’s moiety and the dear heart’s part:
As thus; mine eye’s due is thy outward part,
and my heart’s right thy inward love of heart.

In August 1920 Carlo Tresca, a New-York Italian Anarchist, helped Ireland in the War of Independence from Britain.
He organised to picket the British Embassy in Washington.  He also organised for boycotts of British ships by crews from Italy, Greece etc.

Tresca opposed British tyranny in Ireland, and tyranny anywhere in the world, be it in Fascist Italy, Communist Russia or Mafia dominated unions.

Many people make the mistake of holding Communism as the polar opposite of Fascism.  In fact Anarchism belongs in that position.

Anarchism may be defined as: the liberation of the human mind from the dominion of religion;
the liberation of the human body from the dominion of property; liberation from the shackles and restraint of government.
Anarchism stands for a social order based on the free grouping of individuals for the purpose of producing real social wealth;
an order that will guarantee to every human being free access to the earth and full enjoyment of the necessities of life,
according to individual desires, tastes, and inclinations……………Emma Goldman (Anarchism and Other Essays)

Soloheadbeg is a small rural townland that lies between Limerick Junction Railway Station and Dundrum village in South Tipperary. On this day in 1919 it was the scene of an ambush.

Local constables James McDonnell and Patrick O’Connell were the armed escort for a horse drawn cart containing a load of gelignite from Tipperary Military Barracks for blasting at Soloheadbeg Quarry.

A group of masked men of the IRA’s 3rd Tipperary Brigade, including Dan Breen, Sean Hogan, Seamus Robinson and Sean Treacy, sprang the ambush. The constables raised their rifles and were killed by the IRA men who took the rifles, ammunition and the load of gelignite.

The following day Martial Law was imposed and the British Government offered a reward of £1,000.  Wanted posters for Dan Breen were posted outside every police barracks in the country.

So began the Irish War of Independence.

The song below is evocative of the era.  It describes the plight of one of the IRA men who would not accept the Free State solution and chose to fight the Irish Civil War.  It is very popular with the Tipperary Hurlers, and my son learned to sing it in school in 5th class (age 11).

I joined the flying column in nineteen and sixteen
In Cork with Seán Moylan, Tipperary with Dan Breen
I’m arrested by Free Staters and sentenced for to die
Farewell to Tipperary, said the Galtee Mountain Boy

We went across the valleys and over the hilltops green
Where we met with Dinny Lacey, Seán Hogan and Dan Breen
Seán Moylan and his gallant men, they kept the flag flyin’ high
Farewell to Tipperary, said the Galtee Mountain Boy

We trekked the Wicklow Mountains, we were rebels on the run
Though hunted night and morning, we were outlaws but free men
We roamed the Dublin Mountains when the sun was shining high
Farewell to Tipperary, said the Galtee Mountain Boy

Oh I’ll bid farewell to old Clonmel, I never more will see
And to the Galtee Mountains that oftimes sheltered me
The men who fought for their liberty — who died without a sigh
May their cause be ne’er forgotten said the Galtee Mountain Boy