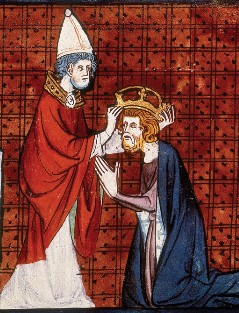 Born April 2nd, 742 Charles became King of the Franks in 768, King of the Lombards in 774 and Emperor of the Romans and the Holy Roman Empire in 800 AD.  Charles I became Charles the Great:  Charlemagne.

He was the power that reunited Europe militarily for the first time since the fall of the Roman Empire.   He cowed and converted the German Saxon tribes and he dispossed the Lombards of Northern Italy in service of the Pope.  He drove the Muslims south of the Pyrenees, but when he tried to push his luck he was driven back.  As he retreated through the mountains the Basques decided to revenge themselves for the sack of Pamplona.  At the battle of Roncesvaux pass his rearguard was destroyed and a certain brave knight named Roland was slain.  The moment was immortalised in the Song of Roland the classic epic of the Amour Courtois which inspired tales such as King Arthur and Robin Hood.

Charlemagne was the Grandson of Charles Martel (the hammer) the man who saved france from invasion by the Arabic armies at the Battle of Tours in 732.  The wars won by Charlmagne were a continuation of the struggles of his Grandfather against Arabs, Saxons, Lombards and Burgundians.

His campaigns in Italy brought him into contact with the Saracens.  With the Franks to the West of the Byzantine Empire the Arabic Sultan, Harun al Rashid, saw an opportunity to occupy his traditional enemy on a third front.  They were already fully occupied with the Arabs to the East and the Bulgarians under Krum to the North.  Baghdad presented Charlemagne with an elephant and a clock as gifts but the talks amounted to nothing other than many sleepless nights for the Byzantine rulers.

The rise of the Franks to become a power and the establishment of the Holy Roman Empire removed any lingering chance for the reunification of the Ancient Roman Empire.  What followed was a clean separation of state and church alike underlined by the Great Schism of 1054.

The title of this post: Joyeuse is the name of Charlemagnes sword.  Supposedly still preserved today in the Louvre the blade is thought to be genuinely from the 8th or 9th century.   Other parts of the sword have been added or changed over the centuries.  It was the blade used for the crowning of the kings of France, even including Napoleon.  It translates simply as “Joy”.

I have no name
I am but two days old.
What shall I call thee?
I happy am
Joy is my name,
sweet joy befall thee!

On the birthday of William Blake here is what is probably, in England anyway, his best known poem.  It is one of the most popular and patriotic English hymns of the Anglican Church.

It is the essence of what it is to be English.  The English Rugby song is “Swing Low Sweet Chariot”.  Queen Boudica, that very embodiment of Britannia, is portrayed riding her Celtic Chariot.

As the British Parliament prepare to vote on the Brexit deal with the EU it is not the Northern Irish that matter, nor the Welsh, nor the Scots.  This is England Theresa May.  This is the time to embody England, to don the mantle of Alfred the Great.  To hell with those pesky Celts, this is an Anglo-Saxon matter.

And did those feet in ancient time
walk upon England’s mountains green?
And was the holy Lamb of God
on England’s pleasant pastures seen?

And did the Countenance Divine
shine forth upon our clouded hills?
And was Jerusalem builded here
among these dark Satanic Mills?

I will not cease from mental fight,
nor shall my sword sleep in my hand
till we have built Jerusalem
In England’s green and pleasant land.

The Clod and the Pebble; by William Blake

“Love seeketh not itself to please,
nor for itself hath any care,
but for another gives its ease,
and builds a Heaven in Hell’s despair.”

So sung a little Clod of Clay
trodden with the cattle’s feet,
but a Pebble of the brook
warbled out these metres meet:

“Love seeketh only self to please,
to bind another to its delight,
joys in another’s loss of ease,
and builds a Hell in Heaven’s despite.”

A close up photo of my gardening pants.  I was amazed at how the Green Shield Beetle changes colour to match the autumn.  They are bright shiny green when they emerge in May and change over the months until they are completely brown by November.  A very sophisticated camouflage strategy at work.

It is not really a beetle at all.  It is from a family called “true bugs”.  I know lots of insects are called “bugs” in North America, but it is not a common usage in Ireland or Britain.  So calling an insect a Bug in Ireland is being very specific.

Some shield bugs are called Stink Bugs because they engage in chemical warfare, releasing strong smelling odours to deter predators.  Some of the odours are attractive to humans, smelling of coriander or almond.  As a result stink bugs are a delicacy in some countries in indochina.  They are ground into a condiment paste with chili, spices and herbs.  I have even seen a recipe for Chicken Liver Paté which uses Stink Bugs as an ingredient.

The Fly; by William Blake

Little Fly,
Thy summer’s play
My thoughtless hand
Has brushed away.

For I dance
And drink, and sing,
Till some blind hand
Shall brush my wing.