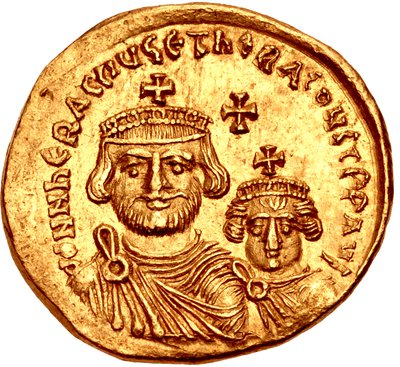 Heraclius was a Byzantine emperor who rose to greatness and then had the sad misfortune to live too long.  He took power in Constantinople in 610 AD when the Byzantine empire was on its knees and under siege by the Sassanid Empire of Persia.

He reformed and rebuilt the army and campaigned successfully against the Persians.  Then he triumphed at the Battle of Nineveh in 627 AD and the Persians withdrew from all their Byzantine conquests.  To add to his legend Heraclius recovered the Christian Cross from the Persians and returned it to Jerusalem.  Some Western Christians even called him “the First Crusader”.

The Persian Empire served as the cork which held the Arabic tribes contained in the Arabian Peninsula.  With the collapse of power in Persia, and the newfound impetus of the Arabs united by Muhammad under the banner of Islam, the game in the middle east changed completely.

As the Arab armies exploded out of the peninsula into Persian lands they began to threaten Byzantine Syria.  Heraclius responded by sending a huge army to the Levant to smash the desert peoples, who they knew of old as raiders and rustlers.

As the massive Byzantine army approached the smaller Arabic forces withdrew to the plains around the Yarmouk River the largest tributary of the Jordan and a natural barrier between Syria and Arabia.

On August 15th 636 AD the Byzantines met the armies of the Rashidun Caliphate and began a series of battles.  In what might be called the “First Six-Day War” the muslim forces did not simply defeat the Byzantines.  They decisively shattered the Byzantine forces and drove them out of Syria, Palestine and Lebanon entirely.

The Battles of Yarmouk are a textbook example of an inferior force decisively defeating a superior force through better generalship.  The hero of the hour was the Arab General Khalid ibn al-Walīd, a companion of Muhammad and a man almost unknown in the west.

Heraclius lived until 641, long enough to see all the lands he regained from the Sassanids lost to the Arabs.  In Arabic and Islamic telling Heraclius was viewed as a wise and learned king who recognised that Islam was the true faith.  He tried to convert his people to Islam but they resisted and he failed.  As a result he was defeated in battle.