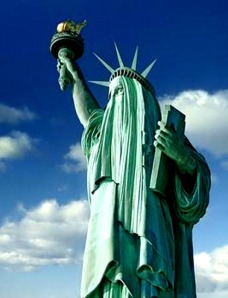 I have a theory that the explosion in popularity in superhero movies has less to do with exploitation of the Marvel and DC franchises and more to do with the American Zeitgeist. I think that ordinary Americans are trying to deal with a raft of stressful and complex issues such as “The war on terrorism”, “The war on drugs”, actual wars in Iraq and Afghanistan, immigration, gun crime, school shootings and a weak economy which has depleted property values and consequent self-worth.

Politicians are supposed to be leaders, who steer the people through problems and dark days. In the USA of today the politicians use fear to motivate support for their cause. Tea Party politicians in particular offer blunt and seemingly simple, compelling solutions.  Intelligent voters can see that these populist, far right wing groups have the potential to bring the world to ruination. Concernedly the Tea Party stance is increasingly mirrored by far right wing parties across Europe such as the UKIP in Britain and National Front movements gaining traction in France, Austria etc.  Hitler and Mussolini used exactly the same tactics to secure power in the 1930’s in the great depression.

Let’s come back to the USA, where adult Americans are barraged by fear about issues over which they have no control from the mainstream politicians, and are offered simple, but frankly lunatic proposals from a right wing that offers Tea instead of good American Coffee.

Why are adult Americans so open to Batman, Superman, Spiderman, the Fantastic Four, the Incredible Hulk, Iron Man, the X-Men, the Flash, the Green Hornet, Captain America etc etc etc? My hypothesis is that superheroes represent a “Deus-ex-machina” type solution to the problems of the world. For a time you can sit in a dark cinema, suspend your disbelief, push away the fear and let the big guy in the garish bodyform suit sort out the bad guys.

Just to establish the rules here, I am looking at the kind of movies that appeal to adults, as opposed to kids and teenagers. What reflects the adult zeitgeist of a period?

During the 1930’s when everyone lived in misery during the depression, movies provided an escape into a world of luxury, excess and class. Fred Astaire and Ginger Rogers dressed in fine outfits and danced their way across art-deco sets, took cruises, flew in aircraft, wore furs and drank champagne. For the cost of a few cents the public could escape the misery of their daily grind and imagine the good life.

During the 1940’s the film industry was employed as a propaganda mouthpiece. The government wanted stories that glorified the brave soldier or the resilient stiff, working unpaid overtime in the factory. Films celebrated Mom, Apple Pie and the defence of the American way of life. Foreign enemies were mocked, vilified and lampooned.

Look back to the 1950’s and the early 1960’s and the public got to choose what they watched again. What they watched was the western. Soldiers returned from battlefields in Europe and the Pacific, got married and went back to work in civvy street. America had a sense of re-birth of the pioneering spirit, the manifest destiny of the American dream. The world was free because of America and America was embodied by the spirit of the Cowboy. The bad guy wore a black hat, the good guy showed restraint, but when pushed he came out shooting from the hip and rode into the sunset with the best girl beside him. Good, simple days when you knew what was what. The enemies were clear, it was the Commies. Senator McCarthy’s Committee on un-American activities could ride roughshod over any objections.

The 1960’s began with 50’s style films such as “The Great Escape” and “The Magnificent 7”. It ended with “Midnight Cowboy”. The dream of Camelot collapsed with the assassinations of the Kennedys. The USA was dragged deeper and deeper into Vietnam. The Civil Rights Movement exposed the hypocrisy of the “American Dream” which was reserved for white folks. The kids born in the 1950’s let their hair grow long, listened to the Devil’s music, Rock and Roll, smoked drugs and wore flowers in their hair. This was reflected in how film taste changed over the decade. In the western movies you could no longer tell who were the good guys and who were the bad guys. Outlaws became heroes, such as “The Wild Bunch” “Cool Hand Luke” and “Butch Cassidy and the Sundance Kid”. Order was subverted in films such as “2001 A Space Odyssey” and “Planet of the Apes”.

The 1970’s were characterised by the impeachment of Nixon. The authorities could no longer be trusted. Society failed the ordinary person. We got films such as “The Deer Hunter”, “Taxi Driver” and “Apocalypse Now” where US soldiers are destroyed by the impact of Vietnam. “One flew over the Cuckoo’s Nest” and “A Clockwork Orange” ask who is mad, the patient or the system? The Godfather films, Serpico and Chinatown point to widespread corruption in policing, planning and judiciary systems.

The 1980’s were a funny decade for film. The invention and widespread availability of Video led to a fundamental restructure of the industry and the films. Old fleabag downtown movie theaters were replaced with modern multiplexes in suburban shopping malls. The target market shifted from adults to teens. The doors opened for John Hughes and his Brat Pack actors with The Breakfast Club, 16 Candles, Pretty in Pink, Ferris Buellers Day Off, George Lucas and Steven Spielberg and the renaissance of the chapter play in films such as the Star Wars and Indiana Jones series, ET, The Princess Bride, Stand by Me, Back to the Future, Dead Poets Society, The Goonies etc. As such the 1980’s resembles the 1940’s in that the industry, not the consumer, drove film choice.

The “Caring, Sharing 1990’s” were soundly reflected in our choices of films of hope and redemption. Saving species and the planet (Jurassic Park), compassion for people and challenging preconceptions (Shawshank, Good Will Hunting, Forest Gump, The Silence of the Lambs, Schindler’s List, Saving Private Ryan, The Green Mile, American History X), challenging consumer culture (Fight Club, American Beauty, The Matrix, Trainspotting). It was a great decade for considered, intelligent and thoughtful films.

Today is Canadian Thanksgiving.  My brother Rory is Canadian, and he is over in Ireland at present, so he is having a family get together.  Rory is the boy on far left of the photo.  I am the one beside him with my back to the camera.  My two oldest brothers are missing from the photo.  I am guessing that one of them took this.

It is a great photo for capturing the zeitgeist.  Clearly back in those days Batman was popular.  Imagine that!

If you saw a picnic today, would you see five kids drinking cups of tea?  Note the Primus stove against the wall with the kettle on it.  The kettle was a fundamental requirement of a picnic in those days.  No coke or sodas, and strangely enough, no overweight people.

We are all sitting on a rubberised groundsheet.  In those days people worried about damp the way we now worry about bird flu and Al Quaeda terrorists.  Damp was the enemy.  You did not sit on damp ground.  You did not wear damp clothes.  Laundry regimes ensured that clothes were dried, folded and stored in a hot press to drive out any residual molecules of moisture before the clothes were worn.

My sister Deirdre (far right) has one trouser leg riding up and one held down with a strap.  Remember when girls slacks had hoops that went around the foot?  They stretched the fabric to keep it sheer.  Do they do that anymore?

This was taken in Skerries, a seaside and Fishing village in North County Dublin.  The Quinn Family (Fergal Quinn of Superquinn fame) used to run the Red Island holiday resort there at the time.  The pink paint on the bench looks funny.  Nowadays it is all blues and greens for seaside furniture.  It’s like somebody wrote a manual of approved furniture paints for seaside applications.  If they painted promenade benches pink today there would probably be complaints from the “concerned public”.  Too racy by far.

My sister Síle (black hair) believed she was adopted.  I wonder why?  For info, the two missing older boys also have red hair.

Note that despite the glorious sunshine and a clear blue sky, there is an umbrella hooked on the back of the bench.  Well, it is Ireland after all.  It never rains on those with umbrellas!

Today also happens to be my mothers birthday, so the thanksgiving is also a birthday celebration.  Sadly I will miss it in person, but thanks to the wonders of Skype I hope to attend in spirit.  Happy 86th Maura.  Here is the poem that I always associate with my mom.  She learned it for her Diploma in Speech and Drama and I have vivid memories of arriving home for lunch from school, to hear her reciting it.  And I remember that my lunch was not ready.  Imagine, a parent having a life!   The indignity.

O stony grey soil of Monaghan
The laugh from my love you thieved;
You took the the gay child of my passion
And gave me your clod-conceived.

You clogged the feet of my boyhood
And I believed that my stumble
Had the poise and stride of Apollo
And his voice my thick-tongued mumble.

You told me the plough was immortal!
O green-life-conquering plough!
Your mandril strained, your coulter blunted
In the smooth lea-field of my brow.

You sang on steaming dunghills
A song of coward’s brood,
You perfumed my clothes with weasel itch,
You fed me on swinish food.

You flung a ditch on my vision
Of beauty, love and truth.
O stony grey soil of Monaghan
You burgled my bank of youth!

Lost the long hours of pleasure
All the women that love young men.
O can I still stroke the monster’s back
Or write with unpoisened pen

His name in these lonely verses
Or mention the dark fields where
The first gay flight of my lyric
Got caught in a peasant’s prayer.

Mullahinsha, Drummeril, Black Shanco –
Wherever I turn I see
In the stony grey soil of Monaghan
Dead loves that were born for me.