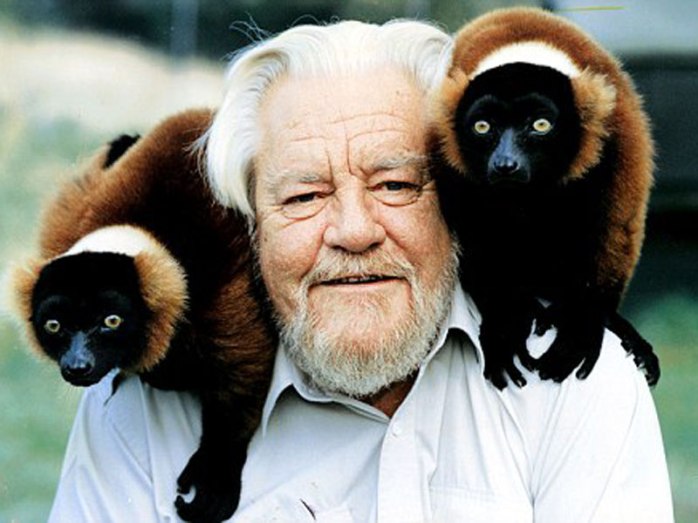 Gerald Durrell with a pair of little brown jobs

When he founded Jersey Zoo Gerald Durrell changed the very purpose of the Zoo.  Instead of being an exhibit for the entertainment of the bored public Durrell created a haven for threatened species.  In the process he moved the entire zeitgeist of Zoo Keepers from the entertainment paradigm to a model of study, conservation and preservation of species.

The greatest success for a Durrell style zoo keeper is not the display of animals, but the act of returning them to the wild, to a habitat made safe for them.

Gerald had a special place in his heart for the animals he called “little brown jobs”.  The bored public came to the zoo to see the headliners, the Tigers, the Lions, Elephants, Giraffes, Gorillas and so on.  It is not enough to save the species we admire.  To be true conservationists we must also protect the species that are less exciting, and indeed some that we find truly repulsive.

To a Lady, viewed by a Head-Louse; by Denise Riley

I with my triumphant bites
Vex useless human parasites.
You world-devourers are for – what?
“Useful” you yourselves are not.
Refer me, lady, to your Gaia –
My jaws will raise your blush of fire.
When humans pause to think of me
It makes their skin crawl eerily:
“Delusional parasitosis”: infestation
Of purely phantom nits’ gestation.
It’s my sole work to multiply –
The task of ladies to ask “Why
Should such a pointless breed exist?”
Only the entomologist
Admits my “good-for-nothing” species
To own the interest of its faeces
For those can raise allergic wheals
Then mortified parental squeals
Or groans of mums or dads who find
Their darlings’ hair home to my kind,
Each louse egg’s tight-cemented pearl
Superglued to their shampooed girl.
I’ll plant rosettes of telltale red
High on her neck, low on her head
Until your steel rake catches me
Or unguents loose their fatal sea.
Fleas acquire some charming tropes
For amorous fluid-mingling hopes;
Lice? Condemned to Owen’s trench
By reportage of mud-blood stench.
Some sorts are meals for grooming birds
While others have engendered words
Like “lousy”, apt for human speech –
Each head-louse purely is for each.
My species’ world obeys no brief
Of reciprocity – such a relief
Not to claim virtue. Ah, your “rich
Biodiversity”! Makes you itch.
I am for nothing – only to increase
My number, swelling after my decease.
“Purposeless” insects may prove good
For thwarting your delusion that all should
Conform to human dreams of mutual aid –
Presumptuous fantasy we lice downgrade.
Lady, I’d answer Robbie Burns:
Let other species take their turns
And do not keep so dour and mean
Vaunting your old Anthropocene.